With up to nine Australians aiming to compete in top level domestic Nordic competitions in 2020, Beyond 90 will be keeping readers up to date with how our players and the teams they are playing in are faring.

It was a week of Aussie announcements and debuts. Two Matildas had their first run in the Norwegian Toppserien, bringing the active Aussie contingent to five; an Aussie played her first game in Iceland’s Urvalsdeild Kvenna; and another was announced as joining Sweden’s Damallsvenskan league.

Karly Roestbakken‘s LSK Kvinner kicked Round 3 off with a comfortable 5-1 victory away to Røa in gentle intermittent rain, LSK’s best result to date in 2020.

LSK still look to be experimenting with personnel – or are perhaps opting to rotate players through for match sharpness – choosing to play Swede Cathrine Dahlström (a bench player for the first two games) as a centre back in place of Norwegian national team player Ina Gausdal. With left back Emilie Woldwik favoured due to her set piece expertise, Gausdal was moved into right back, and Roestbakken was moved onto the bench. She came on as a substitute in central midfield in the 63rd minute, so her versatility is obviously viewed as an asset; this more advanced central midfield role is the third role Roestbakken has undertaken at different times during the three rounds.

Interestingly in the course of second half substitutions, Dahlström shifted to right back, highlighting the extent to which the coach is either assessing options and/or looking for her players to perform in whatever role is required. Competition for starting spots on the team looks to be fierce.

LSK’s opponents Røa are yet to pick up points; even so it was a strong finish to the match by LSK Kvinner with three goals in the last half hour, sending them to equal top of the ladder.

Clare Polkinghorne and Katrina Gorry made impressive debuts for Avaldsnes at home against Teagan Micah‘s Arna-Bjørnar in their Round 3 game. All three players played out the full 90 minutes in a game played in drizzling rain thoughout.

The game had an interesting lead-in midweek, with influential Avaldsnes striker Elise Thorsnes suspended for 3 matches for an arm to the face of an opponent in last week’s game. The club are currently considering an appeal.

Micah did well to save a shot with her feet in the 15th minute but could do nothing about the rebound that was subsequently put away. Her team almost equalised in the last 30 seconds of extra time but finished the game goal-less.

Polkinghorne lined up for Avaldsnes in her familiar centre back role, while Gorry played in front of her as a central midfielder.

Gorry was announced as player of the match, and was also selected in the Toppserien’s official team of the week in her first game. 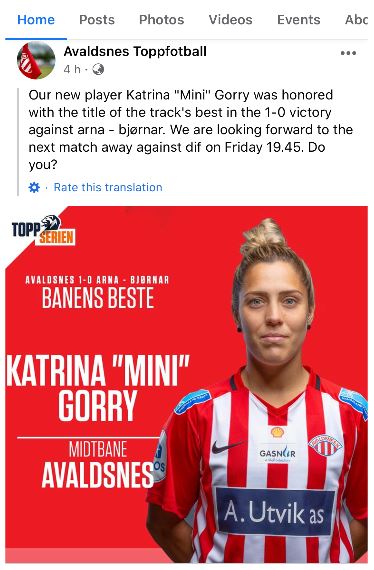 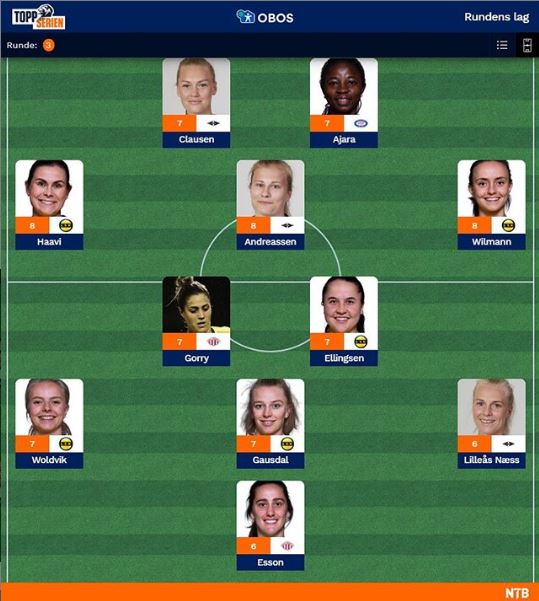 The post-match thoughts of both players can be viewed in this piece for Norwegian TV, where both are interviewed after a preamble in Norwegian. Micah is also shown chatting with the pair after the game.

The round was finished with equal ladder leaders Rosenborg at home in fine weather against Nikola Orgill‘s Kolbotn. With players of the calibre of Kristine Minde and Julie Blakstad on board, the home side took control of first half proceedings after about 15 minutes, and the entire Kolbotn backline (with Orgill once again at right back) was under sustained pressure from then on.

Rosenborg went into halftime 1-0 up thanks to a deflected free kick. Kolbotn had a glimmer of hope in the 48th minute, scoring when Rosenborg’s defence failed to deal with a flicked on header from a dead ball to an attacker on the back post. However, Rosenborg re-asserted themselves seven minutes later with an uncontested header near the Kolbotn six yard box, and never let go. They were camped in Kolbotn territory for much of the second half and came away with a 3-1 victory. 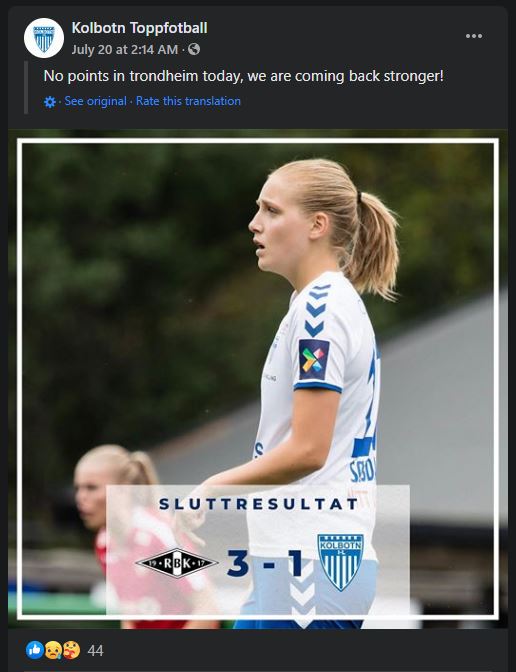 Orgill played out the full 90 minutes and acquitted herself well with her defensive duties, but with the offensive pressure being applied, was unable to overlap much down the right flank.

Just when we thought it was going to go quiet with respect to Aussie involvement in the Swedish Damallsvenskan 2020 season, Emily Gielnik saves the day:

Vittsjö GIK are currently in the bottom three in the league, with just the one draw from five games to date, so Gielnik’s addition to the squad will be very welcome. Stay tuned to this series of articles to see her impact on her new team and the Swedish league.

Laura Hughes has been throwing herself into her work for Thróttur Reykjavík this season so far, but if she’s feeling like the only Aussie fish in the Icelandic Urvalsdeild pond, then Angie Beard‘s arrival and first outing for KR Reykjavík should help matters.

Congratulations to Angie Beard who has signed for Icelandic Champions KR Reykjavík for the rest of the season. Angie has been a standout performer for Melbourne Victory the past few years showing her class and versatility as both a powerful defender and a potent attacking force. pic.twitter.com/h92EAnKwnd

It was fitting then that Beard’s debut was against her compatriot in their Round 7 game. After a goalless first half, the final 15 minutes of the game were a whirlwind. Thróttur scored in the 76th minute, then Hughes and an opposition player were both issued with yellow cards in the 87th minute, leading to Hughes being substituted. Remarkably, KR Reykjavík managed to equalise for a 1-1 final score-line in the fifth minute of extra time.

The result sees both teams climb the ladder by one position this week.

Follow all our coverage of Aussies and Ferns Abroad here.