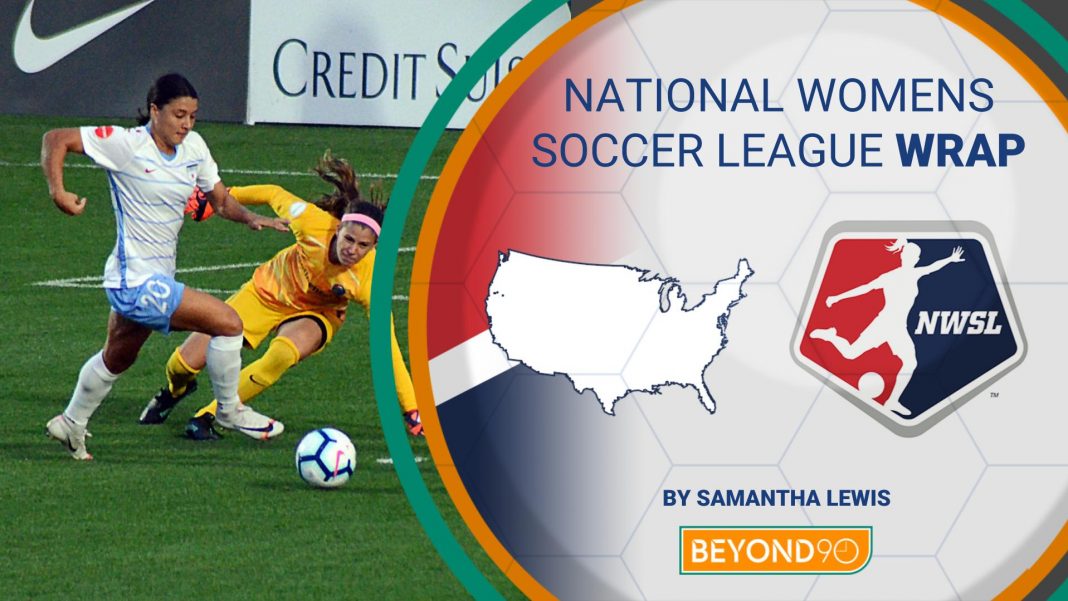 With a number of Aussies playing abroad in the National Women’s Soccer League this year, Beyond 90 will be keeping up with all the results and major talking points across each round.

Last season’s bottom two teams kicked off the 2019 season on Sunday morning, with the New Jersey-based Sky Blue FC travelling to Boyds, Maryland to take on the Spirit.

After several major shifts during the off-season, including parting ways with controversial General Manager Tony Novo, Sky Blue were looking to start off their rebuild with a win on the road.

However, it wasn’t to be as Washington Spirit held out to claim a 2-0 victory thanks to goals from rookie defender Sam Staab and new recruit Megan Crosson.

Matilda Amy Harrison was an unused substitute in her new club’s first win of the season, while fellow Aussie Chloe Logarzo remains sidelined rehabbing an injury.

Highlights from our W last night to start the 2019 @NWSL season! pic.twitter.com/wTl8yJ1Za8

Having last met in the 2018 finals series where the Courage claimed a convincing win before storming to the Championship, North Carolina opened their title defence by hosting the Chicago Red Stars at Sahlen’s Stadium in Cary, North Carolina.

Matildas and Perth Glory striker Sam Kerr picked up exactly where she left off last season, scoring the NWSL’s opening goal and putting Chicago ahead in the 26th minute after a slicing pass from Brisbane Roar’s Yuki Nagasato.

First goal of the #NWSL season goes to @samkerr1 of @ChiRedStarsPR!

However, last year’s Premiership-Championship double title holders wouldn’t be undone, equalising in the 66th minute through USWNT player Crystal Dunn, whose low shot pierced through a forest of Red Star legs and nestled into the far corner of the net, just out of the reach of goalkeeper Alyssa Naeher.

Chicago, which was stacked with W-League stars from Perth Glory’s Katie Naughton, Alyssa Mautz, and Nikki Stanton through to Sydney FC midfielder Danielle Colaprico and Newcastle Jets winger Arin Wright, almost came away with their first big scalp of the season in the closing minutes, but Kerr’s shot came off the crossbar and bounced on the goal line before being cleared, much to the dismay of fans and commentators alike.

It was a heart-in-mouth moment for the Courage, home to Canberra United guest player Denise O’Sullivan, who were ultimately lucky to come away from the match with a single point, despite their dominance all over the park. North Carolina will be breathing a sigh of relief that crossbars are shaped the way they are.

A tight battle in North Carolina ends with a point earned.

After a disappointing 2018 season, Orlando were looking to get their 2019 campaign off on the front foot, hosting last year’s runner-up Portland Thorns at Orlando City Stadium in Florida.

However, it was the visiting side that came out of the blocks hard, forcing Pride goalkeeper Ashlyn Harris into several big saves before the half hour mark. The Thorns’ dominance paid off in the 45th minute when Sydney FC and Matildas striker Caitlin Foord finished off a delightful team move with a cheeky chip between diving defenders and into the net for her first ever NWSL goal.

Portland, also starring Matildas and Canberra United full-back Ellie Carpenter as well as Brisbane Roar midfielder Celeste Boureille, would double their lead just minutes after half time. The roles were reversed now as Foord sent a slicing square pass in for Heath, who scored with a clever improvised back-heel to the back post.

Orlando, which featured several W-League players including Brisbane Roar’s Carson Pickett and Chioma Ubogagu, Melbourne Victory’s Dani Weatherholt, and Perth Glory’s Rachel Hill, had their chances to claw their way back into the game when USWNT striker Alex Morgan had two long-range strikes come off both posts in the 58th and 66th minutes respectively.

Heath had a wide-open chance in the 75th minute after intercepting a poor pass, but her attempted chip over Harris was well read by the goalkeeper who leaped high enough to catch it.

In the dying minutes, Orlando had a great opportunity to reduce the deficit when Morgan came crashing through the box after a long cross, but Thorns keeper Adrianna Franch stayed big and kept out the initial strike. The follow-up shot by Kristen Edmunds went over the crossbar.

The game would end 0-2 in Portland’s favour.

It was one for the rookies as Houston Dash hosted the newly-named Reign FC in the final match of Round 1, seeing out a 1-1 draw at BBVA Compass Stadium in Houston, Texas.

The Dash would, as their name suggests, dash out in front early when left winger Nichelle Prince stole the ball from hesitant Melbourne City defender Theresa Nielsen, smashing it past Reign keeper Michelle Betos (Matilda Lydia Williams was on the bench) and into the net in just the 10th minute.

England international Rachel Daly was in the thick of Houston’s action, causing havoc in the Reign’s back line, which today featured Melbourne City centre-back Lauren Barnes, with her tricky turns and blistering pace.

However, it was Reign FC, featuring Melbourne City midfielder Elise Kellond-Knight who came on as a substitute for City team-mate Jasmyne Spencer early on, that would equalise in the 56th minute when new recruit Darian Jenkins’ shot from the top of the box was deflected past Dash goalkeeper Jane Campbell and into the net at the front post.

The visitors could have got themselves in front in the 65th minute when Melbourne City striker Jodie Taylor blazed past Houston’s two centre-backs – Matildas and Brisbane Roar defender Clare Polkinghorne and Adelaide United’s Amber Brooks – and was through on goal, but she pulled her shot wide.

Houston had a brilliant chance to take the lead in the 76th minute when a beautiful ball from Melbourne Victory’s Christine Nairn was nodded down by Daly into the path of Sydney FC’s Sofia Huerta, but her rocket of a shot came off the post. In the 88th minute, Adelaide United striker Veronica Latsko could have put the Dash in front yet again, but Betos made a big block to keep the scores level.

Taylor had the biggest opportunity of the entire match after being tripped by Campbell in the box in stoppage time. Taylor stood over the spot kick, but her penalty was poorly-taken and Campbell parried it away, with the final score remaining 1-1 at the full time whistle.