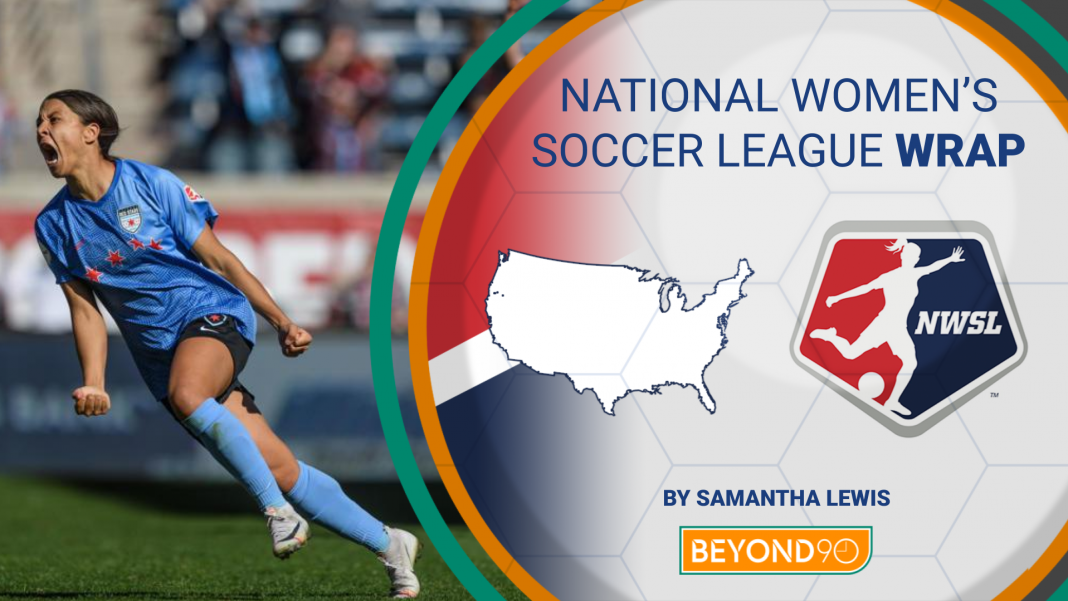 Just as all international players have returned to their domestic competitions after the World Cup, our coverage of the National Women’s Soccer League also returns to your screens!

A lot has happened in the US while our eyes were glued to France. In fact, this season is looking to be one of the closest yet, with just seven points currently separating the top seven teams…

Two of the best-supported teams in the NWSL faced off in the opening match of Week 14 as Portland travelled to Sandy, Utah to take on the Utah Royals in front of 15,931 fans.

This injection of international quality made this one of the games of the season as the teams played out a dramatic 2-2 draw.

Matildas Hayley Raso and Ellie Carpenter were in the starting XI for Portland, while Caitlin Foord would come off the bench in the second half.

Canada captain Christine Sinclair scored an absolute peach on the half-volley to take the lead for Portland in the 9th minute.

USWNT forward Christen Press brought the game back to 1-1 just before half-time following a moment of individual brilliance that included a cheeky nutmeg on Thorns defender Elizabeth Ball (heh).

On 86 minutes, Portland would take the lead once again through USWNT midfielder Lindsey Horan.

Late goal, indeed. @LindseyHoran is back and bashin' 'em in. #UTAvPOR pic.twitter.com/YCShQZyMKe

However, Utah would not give up without a fight. In the 90th minute, Canberra United and Scotland captain Rachel Corsie latched onto a Utah free kick at the back post to earn a point for the home side.

HOLD UP. @RachelCorsie14 has something to say.

Despite looking great on paper, Orlando Pride have struggled this season at both ends of the park, sitting second from the bottom of the ladder after 13 games.

However, in their game against Sky Blue FC at home, there was a glimmer of hope for a bright future. The Pride earned their first shut-out of the season, defeating the visitors 1-0 in front of 9,415 fans.

Alanna Kennedy played the full 90 minutes for Orlando, while her Matildas team-mate Emily Van Egmond came on as a substitute for the Pride. There were also appearances from a number of W-League favourites such as Dani Weatherholt (MVC), Rachel Hill (PER), Chioma Ubogagu (BRI) and Carson Pickett (BRI).

Orlando rookie Marisa Viggiano scored her debut goal in the 22nd minute with this rocket of a strike to give her side the lead.

In fact, were it not for the talents of Sky Blue goalkeeper Kailden Sheridan, the visitors could have found themselves a few more goals down by the end of the game.

It will be a performance that new Orlando coach Marc Skinner can take in his stride as he starts to rebuild for the second half of the NWSL season.

Houston Dash got their rocky season back on track with a 2-1 win over a renewed Washington Spirit side in front of a sell-out crowd of 5,500 at home.

Matilda Kyah Simon made an appearance as a substitute for the Dash, while Amy Harrison, Chloe Logarzo, and new recruit Elise Kellond-Knight all got minutes for the Spirit.

Seven minutes into the second half, Washington opened the scoring through a clever long throw and header by rookie Jordan DiBiassi.

.@DiBiasiJordan slamming through the area on the long thrown in and @WashSpirit have the lead from her powerful header. #WASvHOU pic.twitter.com/aGKGm3P5m2

The home side would then take the lead in the 71st minute through Adelaide United defender Amber Brooks, who would head home a perfectly-weighted free kick from Melbourne Victory midfielder and reigning Julie Dolan medal winner Christine Nairn.

.@abrooks22 beats out her mark on the free kick and @HoustonDash have come from behind to take the lead. #WASvHOU pic.twitter.com/2C7DiCKirR

Washington could have tied the game in the dying minutes after they were awarded a penalty, but Dash goalkeeper Jane Campbell saved brilliantly.

The final game of the round was a thrilling 2-1 win for the Chicago Red Stars over reigning Premiers and Champions North Carolina Courage. The game was held in front of a record 17,388 fans in Chicago – the largest number to attend a women’s football match in that city.

Like the opening match of the round, this game saw the return of several USWNT players including Alyssa Naeher, Julie Ertz and Morgan Brian for Chicago, as well as Abby Dahlkemper, Sam Mewis, Jess McDonald and Crystal Dunn for the Courage.

This ball from @Debinha7 is perfection and the finish from @lynnraenie is just as nice. @TheNCCourage go up after 30 minutes. #CHIvNC on ESPN2. pic.twitter.com/9j14Xv1OL4

Good things come to those who wait. @vdibernardo10 holds up her run just enough to slam home the ball from @agilli16 for the @chiredstarsPR equalizer. #CHIvNC on ESPN2 pic.twitter.com/Vy4VdJt8rn

Of course, it wouldn’t be a Chicago Red Stars game without a bonkers Sam Kerr goal, and fans were not disappointed as she nutmegged New Zealand international Abby Erceg before ALSO nutmegging Canada goalkeeper Stephanie Labbé to make it 2-1 for the Red Stars.

Reign FC had a bye this round and did not play.