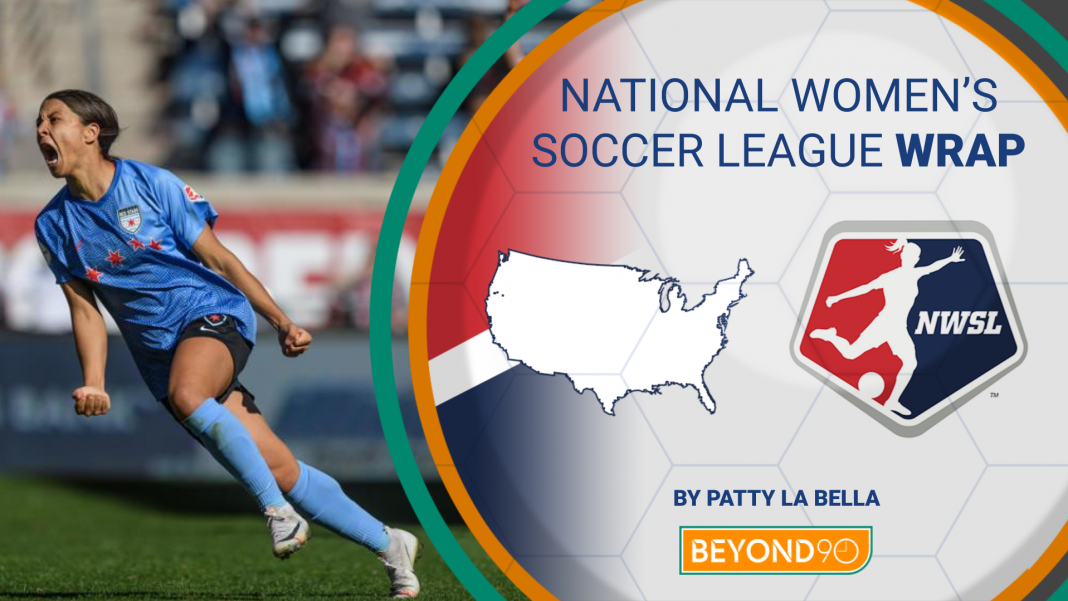 What happens when you have no more records to break? You break your own records!

That’s just what Chicago Red Stars striker Sam Kerr did and it earned her NWSL Player of the Week for Round 23. Kerr now holds the NWSL’s goal-scoring record for a player in a single season with 18 goals so far. Kerr held the NWSL goal scoring record with 17 in 2017.

Despite the 0-0 scoreline, this match had its share of exciting moments, keeping the 5,247 Houston fans on the edge of their seats.

Washington fired the first shot of the game in the third minute when forward Ashley Hatch caught a loose ball that the Houston defence wasn’t able to clear. Although Hatch scored the goal, the referee called her for a handball.

Hatch was involved in another close play in the 15th minute, when she sent a ball past a Houston defender to forward Crystal Thomas, who’s strike was denied by the low-diving Houston goalkeeper Jane Campbell.

Campbell and Houston goalkeeper Aubrey Bledsoe offered most of the highlights on the night, recording their sixth and eighth clean sheets of the season, respectively. Bledsoe made four saves while Campbell finished with three.

However, it wasn’t only the goalkeepers who helped keep the match scoreless, as Washington midfielder Andi Sullivan came up clutch with a headed goal-line clearance in stoppage time.

Houston’s Kyah Simon was ruled out of the match due to an injury to her right calf.

It was announced earlier in the week that Houston midfielder Sofia Huerta will compete in the W-League during the NWSL offseason to play for Sydney FC for the second consecutive year.

It was a battle until the very end.#HOUvWAS in 60 seconds. pic.twitter.com/pzVMdq5bVQ

In a re-scheduled game that was a critical battle for the fourth and final spot in the NWSL playoff spot, Reign FC forward Jodie Taylor assisted on the first goal of the night, then scored a dramatic game-winner in the 86th minute for a 2-1 win over Utah.

Reign forward Bethany Balcer opened the scoring in the 40th minute with the assist by Taylor. Utah equalized in the 67th minute by Utah striker Katie Stengel.

Jodie Taylor on the volley!

Reign defender Steph Catley played the entire match as usual with her consistent run of play, feeding the ball from the wing with left-footed accuracy and pace. Goalkeeper Lydia Williams is still recovering from injury, but was suited up and on the subs list.

Jodie Taylor scored the game-winner to lift Reign FC to a crucial win in the playoff race.

Washington Spirit came from behind to beat the league leaders North Carolina Courage 2-1 in front of a crowd of 5,200 in Maryland.

The North Carolina offence came out of the gates swinging, earning six corner kicks in the first 12 minutes of the game. However, Washington’s defence stepped up to the challenge by knocking down the many shots-on-goal by the 2019 NWSL Shield winners.

Then, in first-half stoppage time, North Carolina forward Jessica McDonald crossed the ball to the near post, and forward Lynn Williams tapped the ball into the net for her 50th NWSL career goal. Only Sam Kerr has scored more than 50 career goals in the NWSL.

.@lynnraenie with her 5️⃣0️⃣th #NWSL goal with the last kick of the half!

In a move to play more aggressively, Washington changed their formation heading into the second half, subbing in Chloe Logarzo to play an attacking midfielder role.

In the 75th minute, Washington forward Mallory Pugh fired a strike from the left side of the box which deflected and found its way into the net to level the score.

About 10 minutes later, Washington striker and 2019 FIFA Women’s World Cup Bronze Ball winner Rose Lavelle found herself with space at the top of the box, made a quick cut to her left foot, then fired a low drive into the far right post to win the game.

Washington’s Amy Harrison was available to play but never entered the match.

The ⭐️ came to play as @MalPugh and @roselavelle get on the scoresheet in Washington's victory.

Utah Royals FC fell 2-1 on the road to the Chicago Red Stars, officially knocking the team out of playoff contention.

Vanessa DiBernardo opened the scoring for Chicago with a long-distance rocket from outside the box. It was the midfielder’s third goal of 2019.

Minutes later, Utah striker Christen Press levelled the match with a running header from a perfectly-placed feed by Gunny Jónsdóttir.

Utah’s hopes for a playoff spot ended in the 85th minute as Sam Kerr took a close-range shot on goal. Utah’s goalkeeper blocked the shot, but couldn’t contain it, deflecting the ball to an on-coming Yuki Nagasato, who put the ball into the back of an empty net for the winning goal.

.@Yuki_Ogimi on the rebound for ⭐️!

Has Chicago found the game-winning goal?!

Sky Blue FC and Orlando Pride both earned a hard-fought point in a 1-1 in front of 8,314 fans at Red Bull Arena in New Jersey.

In the 18th minute, Orlando defender Shelina Zadorsky scored her first-ever professional goal. Ali Krieger directed the ball toward Zadorsky, who fired a rocket into the net at the far post.

A free kick from @emslie22 and an easy finish for @Shelina4 at the back post.

Possession went back and forth between the two sides with some opportunities for both but nothing on frame. For Orlando, Alanna Kennedy played most of the season at midfield. In this match however, Kennedy slotted in at left back for most of the match.

In equalizer came in the 88th minute off of a corner kick that found the head of Sky Blue forward Carli Lloyd. Despite being surrounded by Orlando players, Lloyd timed the lofting ball perfectly and redirected with her head into the right corner of the goal.

Orlando’s Emily van Egmond was ruled out of the match due to a left ankle injury.

Sky Blue FC and Orlando ended all knotted up in an entertaining contest at @RedBullArena.

There was plenty of Aussie influence in this rival match that saw Reign FC clinch a playoff berth with a 2-0 win over Portland Thorns.

Portland defender Ellie Carpenter did her best to contain FIFA Best Player Megan Rapinoe on the left side. With Rapinoe in the match, defender Steph Catley dropped back into the center back position.

In the 27th minute, Reign forward Jodie Taylor received the ball in the box, spun her defender and fired a rocket into the far post.

Portland forwards Hayley Raso and Cailin Foord had their share of shots on goal, keeping the Reign defenders on their heels for most of the match. In the 24th minute, Raso slid a ball across the backline but sailed just past the far post, missing a goal by inches.

In the 33rd minute, Foord was shown a yellow card for a hard collision with the Reign goalkeeper.

In the 81st minute, sub Bethany Balcer slotted a left-footed goal into the near post to seal the victory for the Reign.

The Portland loss gave the Chicago Red Stars second place in the standings and home field in the semifinals.

Reign goalkeeper Lydia Williams was available after coming back from the 45-day disabled list, but never entered the match.

.@ReignFC sealed a second-straight playoff berth with a win over @ThornsFC. #SEAvPOR in 60 seconds. pic.twitter.com/te9NGRM3DU

Despite the FIFA international break coming up this week, there will be one game played on October 5, 2019, as the Washington Spirit travel to Orlando Pride. This is a rescheduled match that was canceled during the season.