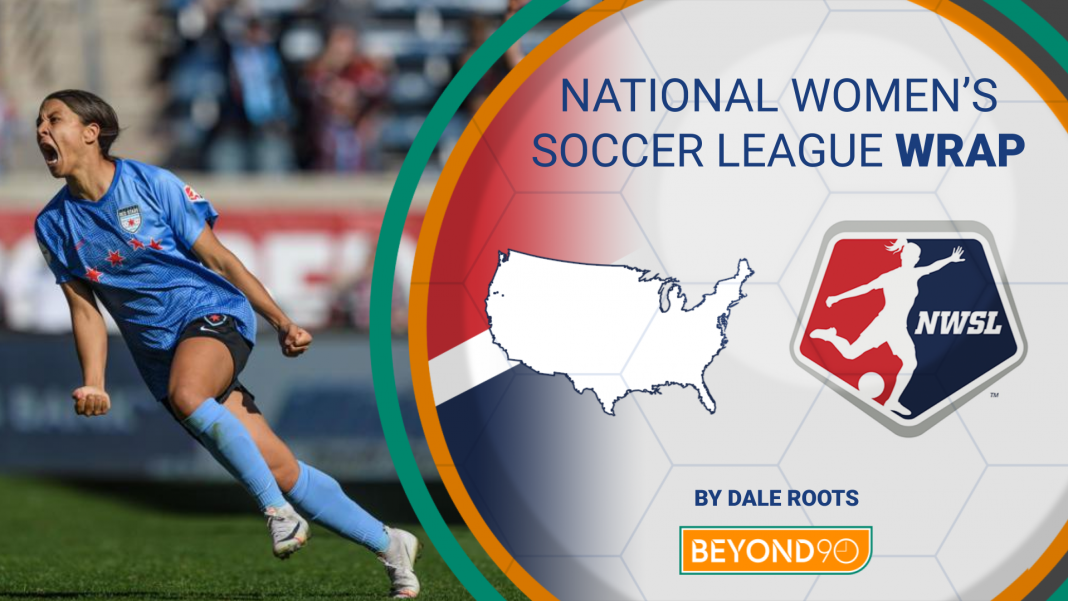 In the words of glam-rockers Europe, “it’s the final countdown” – to the 2019 NWSL Playoffs, that is! In the final round of the regular season, we learned that the only way to stop Sam Kerr from scoring is to give her team two weeks off, and people in Portland really love football, while Orlando and Reign play out another classic in Florida.

Washington travelled south to Florida for the lone game of the week, looking to break a winless streak at Orlando City Stadium stretching back to April 2017. Already eliminated from playoff contention, and missing players due to international commitments, both managers shuffled their respective line-ups, with Orlando handing a senior debut to goalkeeper Lainey Burdett, while the visitors fielded an inexperienced bench in the hope of blooding some fresh faces.

Unfortunately for the debutante stopper, it would only be five minutes into the match before she was picking the ball out of her net; driving into the Orlando half with purpose, Ashley Hatch cut the ball back onto her left foot and unleashed a perfectly-curling shot past Burdett to put her side ahead.

That finish, so smooth. @ash_hatch33 puts @WashSpirit in front.

Washington’s second would be no fault of Burdett however, with midfielder Joanna Boyles playing a wayward pass towards her own goal, only for substitute Tiffany McCarty to nip in and feed Crystal Thomas for her third goal of the season.

A mistake at the back from @ORLPride and Crystal Thomas eventually capitalizes for @WashSpirit.

Just 20 minutes later it was debutante McCarty getting herself in on the act, swivelling on her shot on the edge of the box to score a brilliant maiden professional goal over the diving Burdett.

What'd you do, Tiffany McCarty?! 😳

.@WashSpirit grabbed all 3️⃣ points over the weekend against @ORLPride.

See how they earned the road victory during the lone #NWSL game on Saturday.#ORLvWAS pic.twitter.com/66paJd9u8C

Looking to sign off on their third consecutive league-winning season in style, North Carolina faced a Sky Blue side eager to earn just their second win against the Courage. Despite both the Shield and a home semi-final being assured, North Carolina fielded close to its full-strength line-up, with only goalkeeper Stephanie Labbé and midfield Sam Mewis rested ahead of the playoffs.

The hosts started as they’ve done all season – pressing high up the pitch and looking to force their opponent into errors in their own half. Their endeavour in the front third was rewarded after just 16 minutes, with Jess McDonald stealing the ball in midfield, driving towards goal, and side-footing her shot past Kailen Sheridan to open the scoring.

Counterattack ends in a finish from @J_Mac1422.

Another great goal in the books for @CarliLloyd.

The Courage regained the lead in controversial fashion just two minutes later through Debinha, with the Brazilian chipping over Sheridan while Sky Blue winger Imani Dorsey lay prone in the goalmouth after a heavy collision.

.@Debinha7 gives @TheNCCourage the lead back in ⚡️ fast fashion.

The hosts doubled their advantage late in the second half, with Jess McDonald scoring her second for the match, popping up in the six-yard box to turn home

Sky Blue pulled a goal back late on, making for a nervous final few minutes in Cary, with Dominique Richardson unleashing an absolute howitzer from the edge of the box to notch her first professional goal in her sixth NWSL season.

What a great strike by @Domi_Richardson!

The Courage earned another victory before the league leaders celebrated winning the #NWSL Shield.

With little but pride to play for – pun intended – Orlando welcomed fourth-placed Reign to Orlando City Stadium for their final match of the 2019 season. With Reign needing a draw to confirm their playoff spot, manager Vlatko Andonovski once again picked close to his full-strength line-up, preferring Darian Jenkins to Ifeoma Onumonu on the right flank, while midfielder Brittany Belcer continued her record of having played every match this season.

That strong XI would be more than tested early on by a plucky home side, finally conceding the opener through a brilliant Rachel Hill finish, rounding Reign keeper Casey Murphy to slot home after a delightful pass from Clare Emslie.

Class all around. Great pass by @emslie22, great finish by @r_hill3.

Reign would equalise minutes later through Jenkins, the right winger nodding home at the back post after a brilliant cross from Matildas fullback Steph Catley.

Reign doubled their advantage late in the first half, with Jodie Taylor running onto a perfect pass from Rumi Utsugi and turning the Orlando inside out like a washed pair of socks to score her fifth goal of the campaign.

Orlando equalised late in the second through who else but Marta, the Brazilian superstar firing through a forest of legs to drag her team level with five minutes to play.

Matildas defenders Catley and Alanna Kennedy both clocked 90 minutes for their respective sides, while goalkeeper Lydia Williams continues her recovery with another stint on the bench for Reign.

Orlando and Reign FC battled to a 2-2 draw in an entertaining contest.

Despite being eliminated from playoff contention prior to kickoff, Utah and Houston both fielded close to full-strength line-ups for their final match of the season.

The crowd of just under 10,000 fans barely had time to get to their seats before USWNT striker Christen Press opened the scoring with just three minutes played. Combining brilliantly with strike partner Katie Stengel, Press broke into the Houston box and powered her shot beyond the diving Jane Campbell.

Barely 20 minutes late Utah extended their lead through Amy Rodriguez, with the striker running onto a Verónica Boquete through-ball to finish off a well-worked team move.

Lovely build-up play by @UtahRoyalsFC and A-Rod finishes it off.

Houston dragged themselves back into the contest midway through the second half, with Kristie Mewis pouncing on a brilliant low cross from winger Sofia Huerta to score at the back post.

The fightback is on for @HoustonDash after a @KristieMewie close-range finish.

First-half goals from @ChristenPress and @AmyRodriguez8 pushed Utah to a victory against Houston.

Portland and Washington faced off in front of the second-largest crowd in NWSL history, as a massive 24,521 fans turned out in the Rose City for the final match of the regular season.

With an away playoff fixture in Chicago already assured, Thorns manager Mark Parsons made a number of changes, handing midfielder Emily Ogle her starting debut and Brazilian number 10 Andressinha her first start since June.

Unfortunately for the massive home crowd, Washington keeper Audrey Bledsoe – who will once again turn out for Sydney this W-League season – put on an absolute show in the cage, making five saves against a potent Thorns attack.

Portland continued to push for a winner in the second half, raining shots down upon Bledsoe’s goal – a total of 13 in the second half – only for the Spirit back five to somehow block or save the shot each time.

.@AubreyBledsoe is playing in a big role keeping things level.

Bledsoe would prove to be the key for Washington in what was one of the most entertaining – and perhaps frustrating – scoreless draws in NWSL history, but her well-marshalled back four deserve just as much credit, recording eight blocks to deny the Thorns a final home win for the season.

Matildas winger Chloe Logarzo made her bow at half-time, racking up a full 45 minutes for Washington, while Portland striker Caitlin Foord was a second half substitute for the home side, replacing midfielder Lindsey Horan in the 78th minute. Fullbacks Amy Harrison and Ellie Carpenter both missed seeing any action – Harrison as an unused substitute, and Carpenter missing the match entirely.

Portland and Washington earned a point apiece as neither side could find the breakthrough.