Goalkeepers make or break sides. The three keepers the Matildas are bringing to the World Cup will be essential to the success of this side in the World Cup. Each bring something unique to the squad, but be certain, all will be one eyed at saving any shot they come up against.

These are the Matildas goalkeepers for the 2019 FIFA Women’s World Cup. 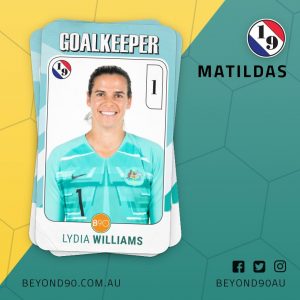 Making her debut at the tender age of 17, Williams has been a mainstay protecting the Matildas net in recent years. With three World Cups under her belt, and the most recent in Canada donning the gloves for the majority of the campaign, Williams is the experienced keeper any side heading into the competition hopes to have.

Her acrobatics in goal have come to the aid of Melbourne City many times throughout the W-League season, while also shining internationally in the NWSL for Reign FC. Expect Williams to be that marshal in Australia’s defence, bringing her experience and performing those jaw dropping saves only her spider like arms seem capable of reaching. 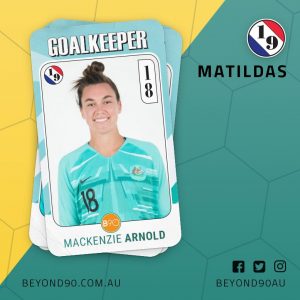 Every strong squad needs a strong deputy goalkeeper who is waiting in the wings and able to take over in a moment’s notice. For the Matildas that’s Mackenzie Arnold. A consistent performer in the W-League for Brisbane Roar, Arnold has seen a good handful of caps for a young keeper having to bide her time against one of the world’s best in Lydia Williams.

Already one World Cup campaign under her belt, Arnold has been an essential part  and mainstay of the Matildas squad. After experiencing the heat of the Asian Cup, and that wild game against Thailand including winning an essential penalty shootout in during the campaign, Arnold comes with experience far beyond her 23 caps. Able to make quick reaction saves and excellent with her feet, be sure that Arnold will be pushing for that top spot the whole way through the tournament. 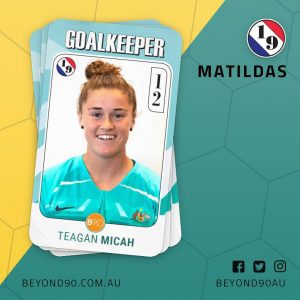 A relative unknown for a lot of Matilda’s fans. Unlike many other players in the squad, Micah has taken the road less travelled by Australians to develop in the American college system. Clearly, she’s hot property as she comfortably holds down the number one spot at UCLA, one of the best soccer schools in the country.

Already an NCAA national runner-up with UCLA, Micah has come on in leaps and bounds since moving from the W-League to the United States in 2016. The Bruins’ starting goalkeeper since the moment she stepped on campus, Micah has been almost ever-present between the sticks, establishing herself as one of the top shot-stoppers in the nation. Micah has regularly come up with saves in clutch situations, securing 26 clean sheets in 64 appearances for UCLA and conceding less than a single goal per game in three seasons.

Although Micah is yet to take to the pitch for the Matildas, this is the goalkeeper’s third call-up to a national squad, following an emergency call-up for the 2017 Tournament of Nations and a selection for the recent friendly against the United States.

Coming off the back of a stunning W-League season by Aussie goalkeepers, to beat out the competition, Micah must be held in high regard by Milicic. So expect some top quality input from Micah during the tournament, even if it’s largely time on the bench. She’s certainly a keeper to have an eye on for the future.

Analysis: Matildas Saved by the Chaos Against China