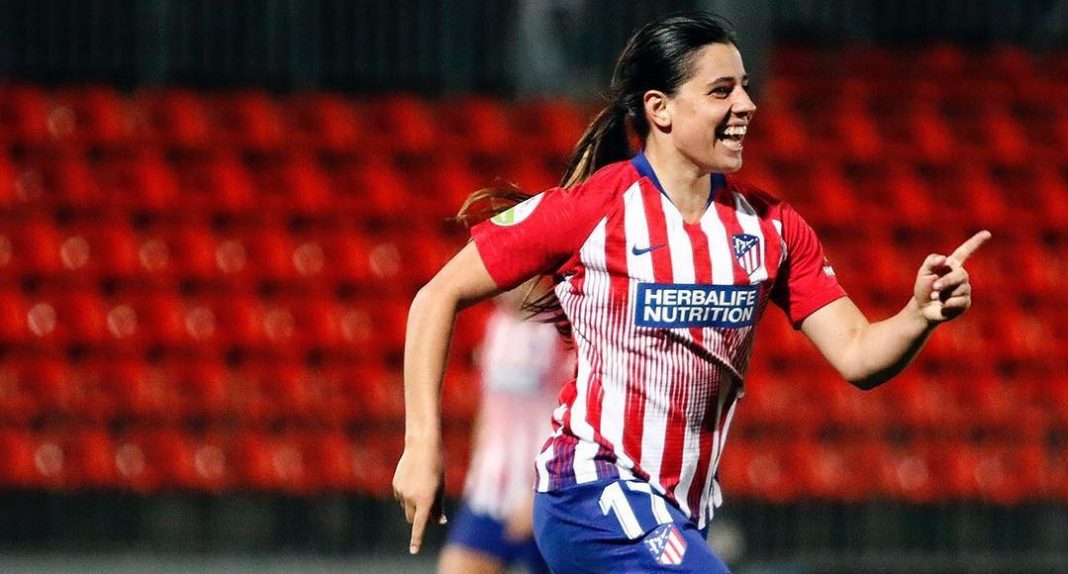 There’s an age old saying that life’s greatest rewards are on the other side of fear. It’s a lesson that Adelaide United’s Alex Chidiac had to learn by travelling over 16,000km out of her comfort zone, where she was offered the opportunity of a lifetime in Spain.

Chidiac became the first Australian footballer to ever play for Atlético Madrid when she signed for the Spanish champions, but it wasn’t the first time the Matildas midfielder made a move to chase her footballing aspirations, albeit on a much smaller scale.

After making her debut for Adelaide United in the 2014/15 W-League season, the then 16-year-old packed up and relocated from her parent’s home in Adelaide, signing on as Melbourne City’s youngest player for their inaugural season in the W-League in 2015.

“I had a really great experience with Melbourne City, it was the first year they’d had a team in the W-League, so I felt really lucky to be a part of it,” she said.

“They knew I was young and moving away from home for the first time, so they did everything they could to make me feel comfortable. Of course, I missed my family, but I knew what a great opportunity and experience it would be, both on and off the field.”

Chidiac transitioned into the team seamlessly, helping Melbourne City to an undefeated season and W-League Championship. Her struggles were less about football and more of those well known to anyone navigating adulthood and newfound independence.

“I did a lot of cooking with my grandma growing up, so I was able to make my own meals without any problems, except for one time when I thought it would be a good idea to cook half a pumpkin in the oven without cutting it… My housemate still likes to remind me about that,” she laughed.

“The only part I didn’t like was having to clean my own clothes. Even though I knew how to do it, let’s just say I may have re-used dirty clothes more than once, just to get out of doing my laundry… My mum definitely won’t enjoy hearing this!”

The @ALeague captain, Patrick Kisnorbo, and a @WLeague star of the future, Alex Chidiac! #together pic.twitter.com/SDZkJTZ5uD

Cooking mishaps and dirty clothes aside, the now 20-year-old has come full circle, travelling to Spain to play for one of the biggest teams in the world, and taking out the Liga Femenina title for good measure.

What makes the championship win especially significant is that it took a lot of soul searching, tackling her fear of the unknown, and intervention from a friend for Chidiac to decide Spain was where she needed to be.

“Playing in Spain is something I’d always wanted to do, but I never expected the first club I would play for overseas, to be Atlético Madrid.

“When I got the news that they wanted to sign me, I was in complete shock and it took me a little while to decide if I would go. My mind was all over the place.

“I was tossing up between staying in Australia with the Future Matildas or playing in the W-League, especially considering we were heading into a World Cup year. I thought changing things up and moving overseas would be too risky,” she said.

“I made a list of pros and cons, and spoke to my family and friends, but I was still torn. I thought to myself, ‘this is a country where I won’t know anyone and I don’t speak the language.’ I was so stressed out and just wanted to focus on the Young Matildas tournament I was playing in, in Indonesia.”

It wasn’t until she received some valuable advice from good friend and teammate, Jada Whyman, that Chidiac’s decision to take that leap of faith was cemented.

“It took a good talk with my friend Jada Whyman for me to decide I was going to Spain,” Chidiac shared.

“Jada said to me ‘Don’t let fear make the decision for you’ and once I heard those words, I knew I was just scared of the unknown. I was completely honest with myself and realised if I didn’t go, I’d be giving into fear and that’s when I knew I had to take the chance.”

Even now, ten months after uprooting her life and taking out a European league, Chidiac still finds the experience surreal.

“If I’m being completely honest, I am still trying to wrap my head around it,” she said.

“There were moments I would sit in the change room and I’d look down and see the Atlético crest on my chest and couldn’t believe I was really there.”

Adapting to a new style of play was an adjustment for the midfielder, initially feeling out of her depth.

“I grew up watching Spanish football, thanks to my dad. I’d always admired the way they played, but adjusting to the way Atlético played wasn’t as easy as watching those games at 3 am back home.

“In Australia, we play quite a structured game, but in Spain, everyone just seems to go off their own instinct. There is a lot of freedom. These girls have grown up playing this way, so there was a lot of catching up for me to do,” she said.

“In my first game, I was told I was coming in on the left side [of a diamond formation] but within two minutes I found myself on every side of the diamond, constantly changing positions and moving. I remember looking around and thinking ‘I have absolutely no idea where I’m supposed to be!’”

Chidiac’s confidence was knocked on many occasions, but never enough to make her doubt she’d made the right decision.

“One of the biggest things I’ve learnt playing for Atlético is perseverance,” she said.

“I made countless mistakes in training throughout the year and when I’ve been given an opportunity, have played poorly in some games. I had felt like I’d failed more times than I can count this season and that’s not an easy thing to deal with, especially when you’re so far from home and don’t have anyone close to talk to about it.”

But the versatile South Australian found her feet and was able to score three goals for her team throughout the season.

“Honestly, playing for Atlético was amazing. Any time I would get out on to the field was a highlight for me, because I’d worked so hard to get to that point, so I was grateful every time I’d get to put the strip on,” she said.

“There were moments like scoring my first goal, getting my first start, and of course winning the league that made it all worth it. I now trust that if I keep pushing myself on and off the field, everything will come together in the end.”

Another moment Chidiac won’t forget any time soon was her team’s recent match against Barcelona in front of 60,000 fans – the biggest crowd ever recorded at a women’s club football game.

“It just seems as though women’s football is experiencing an amazing period of interest and growth. I never thought I’d experience what it would be like to walk into the Wanda Metropolitano and see 60,000 passionate football fans at a women’s game,” she said.

“Even though we didn’t get the result we wanted, it was bigger than just that game. We were all part of what I believe was a massive turning point in women’s football and I can only see things getting bigger and better from here.”

Now that her season has come to an end, the World Cup is definitely on her mind, but Chidiac is looking forward to some quality time with her family first.

“Naturally I would love to be part of the team World Cup, but I’m just taking each day as it comes until the squad is announced.

“Until then my parents have told me that we are going to Kangaroo Island when I get back home, which I’m really excited about. I’ve heard they have penguins there and I have a slight obsession with penguins, so I can’t wait!” she said.

As for her future football career, now that she’s conquered her fear of the unknown, the best is yet to come for Chidiac.

“I want to continue to challenge myself both professionally and personally. My goal is to keep putting myself in environments that push me and develop my skills and confidence as a player. Who knows where that will take me.”