Match of the Round: Woden-Weston v Wagga City

Round 8 of the Capital Football NPLW saw the first-ever meeting between Woden-Weston and Wagga City, a new “Wanderers derby” that could potentially over time be known as “The Big W”.

Wagga City started the season with a win 4-1 at home against Tuggeranong but had not tasted success since, while Woden-Weston sit just outside the top four, desperate to secure a win to maintain their push for a finals berth and match their forthcoming Federation Cup.

A moment of quality from Woden-Weston’s Sofia Christopherson stole the game from Wagga City 3-2 after City had gone ahead courtesy of two deadly free kicks from Raechel Lyon and Cassia McGlashan had responded with two goals for Woden-Weston.

NPLW FT |
A second win of the season for @tufc_tuggies as they saw off @COFC1956 at Greenway, while @wodwstfc prevailed in the Wanderers derby thanks to a late goal against @WaggaWanderers! #NPLWCF pic.twitter.com/uO4eZ5q9Gl

Woden-Weston opened the game with an attack down the right flank and a subsequent throw-in by Iesha de Andrade – who must have the longest throw in the competition – made its way through to the City keeper. Her throw-ins were to turn around Wagga City defenders throughout the game.

It was quickly evident that the workrate and speed of Woden-Weston forwards Cassia McGlashan and Sofia Christopherson were going to make it a challenging outing for the Wagga City defence.

The Wagga City midfield trio of Madeline Harris, Raechel Lyon and Piper Lockley-Hinchen were soon presenting their own challenges to their midfield counterparts; Lockley-Hinchen in particular was playing further forward, often showing off a delightful first touch and ability to play intelligent through balls for her forwards.

Early pressure was being applied by Woden-Weston, and in the 7th minute a McGlashan free kick was parried onto the post by City keeper Samantha Emms. Anna Vandenbroucke was on the spot for the home side, but could only sky the ball over the bar from close range.

Three minutes later Christopherson harried her defender from a goal kick and crossed an excellent ball into the penalty box again for Vandenbroucke, but the bouncy synthetic surface did her no favours and she was unable to do more than scuff a volley wide of the post.

The quarter-hour mark saw a burst of dominance by Wagga City, with a dangerous Lyon free kick from just outside the penalty box cleared, and Lockley-Hinchen orchestrating moves and shooting just wide of the post in the 20th minute after intercepting a Woden-Weston goal kick.

In the 27th minute a free kick to City was knocked over the wall by Lyon but easily collected by Lilian Geale in the Woden-Weston goal.

Woden-Weston reasserted themselves in the last 15 minutes of the half, with a header from a corner saved low, and another corner following a Christopherson run down the right wing pushed wide of goal at distance by Bridget Plummer.

The last minute of the half was an eventful one, with a Woden-Weston free kick from De Andrade scrambled away from the box, and a yellow card issued to Lockley-Hinchen for a tackle from behind on Woden-Weston’s Samantha Briggs. The ensuing free kick from their own half threatened Emms in the City goal with attackers bearing down on her, but the ball was able to be cleared, with the half ending scoreless.

McGlashan was heavily involved in the opening ten minutes of the second half. An early shot on goal from inside the penalty box sailed just over the bar, and five minutes later she sent in a superb low cross that only just eluded her fellow attackers in front of goal. There was a repeat performance from McGlashan in the 54th minute, and this time the ball was met in the six yard box by Shaquille Chong, whose effort was saved point-blank by Emms in goal, with Christopherson unable to make the most of the rebound.

McGlashan was not to be denied a minute later from the penalty spot after Christopherson was brought down in the box by Kristen Prior, who was awarded a yellow card for the challenge. The ball was tucked away to Emms’ right for a 1-0 lead to Woden-Weston.

On the hour Wagga City responded in the best possible way; first threatening with a Dimity Curran shot that hit the crossbar, then a minute later with Lyon firing a long distance dead ball shot into the top right corner of the net to make the score 1-1.

Woden-Weston central midfielder Alex McKenzie had an impressive moment in the 64th minute, picking up the ball on the half way line and weaving her way to the penalty box past several opponents. Her low shot was parried away by Emms in goal and cleared for a corner.

Another free kick was awarded to Wagga City on the edge of Woden-Weston’s penalty area in the 68th minute and Lyon stepped up once more. Her shot was precisely placed to the right of the keeper and City were up 2-1. This was to be Lyon’s last involvement of the game as she left the field having scored. 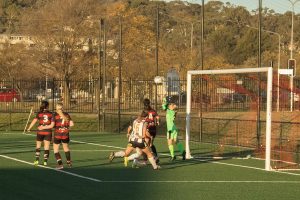 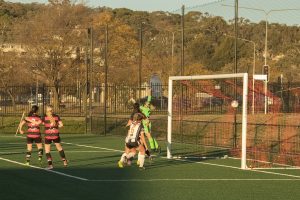 In the 77th minute a Wagga City dead ball attempt from distance was taken by Lockley-Hinchen, but this time Emms was ready for a ball that didn’t quite have the height of Lyon’s first goal.

The potent combination of Christopherson and McGlashan came to the fore in the 78th minute for Woden-Weston as their team looked to finish the game strongly. Christopherson’s trademark left wing run culminated in a ball centred into McGlashan from the by-line inside the six yard box, and McGlashan made no mistake with the tap-in to level at 2-2.

The final ten minutes of the game was all Woden-Weston, who lifted their intensity on the back of the equalising goal. Several attacking opportunities came via efforts by McGlashan and Chong but it was fitting that a moment of quality from Christopherson in the 85th proved to be the decider. A ball received on the left edge of the penalty box was expertly dispatched with a low dipping shot to the inside netting of the right side of the net to give Woden-Weston a 3-2 lead.

Late moments of drama occurred as Woden-Weston’s McKenzie received her team’s sole yellow card for pushing her opponent, and a goal for her team was disallowed in the last kick of the game from a keeper fumble after the referee judged that Emms had been fouled.

The inaugural Wanderers derby was a close affair with some quality goals scored. Woden-Weston coach Mark Boyd will be happy with how vigorously the team closed the game out, keeping them in the hunt for the top four, while City coach Mick Godbier will be scratching his head about his team’s late game performance once Lyon left the field, having taken the lead.

COVID-19: What Next for Women’s Football?