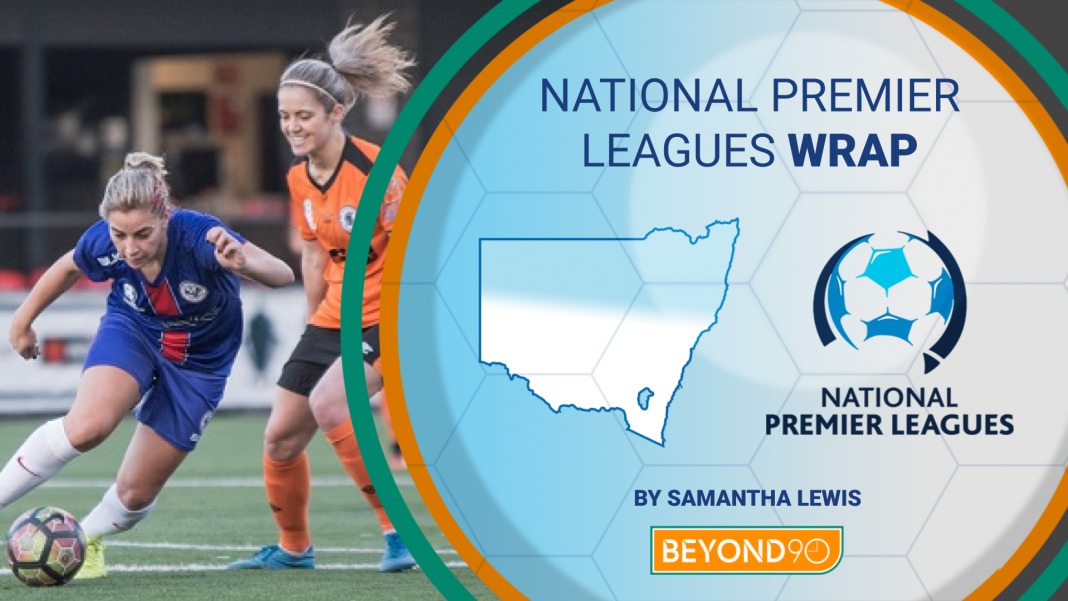 The penultimate round of the NSW NPLW competition saw Sydney University secure their second straight Premiership with a round to spare, following their Club Championship victory last week. Having lost just one game all season, Uni will be clear favourites to take out the Championship title as well after falling at the final hurdle last year.

The weekend also saw newly-promoted Sydney Olympic secure second place with a tight 1-0 win over fourth-placed Northern Tigers, while Illawarra kept themselves in the running for a top 3 spot after a 3-2 victory over Football NSW Institute.

Match of the Round: Blacktown Spartans v Manly United

This weekend’s Match of the Round featured the latest chapter in one of the most surprising stories of the season. Blacktown Spartans clinched their first finals appearance since 2015 with a 3-1 win over Manly United at Blacktown Football Park on Sunday afternoon.

The opening ten minutes were tense, and United were forced into an early substitution following Blacktown centre-back Hannah Bourke’s crunching tackle on Manly attacker Sunny Franco. Both sides struggled to settle into the match after that, neither team having any real sight of the goal.

It was around the 20 minute mark that the Spartans began to take control of the match. Their dynamic 4-4-2 formation allowed plenty of overlaps out wide, while also helping them play neat combination passes through the middle of the park.

Striker Ashlie Crofts could have opened the scoring for the home side at around this time, slicing between Manly’s two centre-backs to get onto the end of Annabelle Daczko’s lobbed pass. Crofts then attempted to volley past goalkeeper Nicole Simonsen, who had come out into no-woman’s-land. Simonsen impressively got a hand to the ball to take the pace off the chip, but it spun backwards and looked to be dribbling over the line, only to be dramatically cleared by Ally Green.

Crofts would get another chance six minutes later, and this time she made sure to bury it. Some persistent work from strike-partner Linda Dudek, coupled with a lucky deflection following a 50-50 challenge, saw Dudek send a perfectly weighted pass in behind Manly’s defence for Crofts’ diagonal run. Crofts then opened her hips and poked the ball under the onrushing Simonsen to make it 1-0 to the home side.

Blacktown’s organised defence, anchored by Melbourne Victory goalkeeper Casey Dumont, meant Manly had almost zero clear opportunities on goal in the first half. Patient and direct passing out from the back, and the clever use of Dudek as a faux-10 — dropping deep with her back to goal to connect the midfield with Crofts and the overlapping wing-backs — saw Manly struggle to find defensive answers.

Two Blacktown chances on goal in the 35th and 40th minute showed the home team’s attacking flexibility using this formation. The first came in the form of another lofted pass to the lightning-quick Crofts, who once again got in behind Manly’s stretched defenders after Dudek had dropped into midfield, while the second came when Dudek made a surging run down the centre-left channel before squaring for Crofts, who had been left in acres of space near the top of the box, but her shot was over the crossbar.

The home team would make up for the opportunities they missed in the first half, doubling their lead in the first minute of the second. After defender Alix Roberts’ strong run down the centre-right channel took out two Manly defenders, she sent a perfect lofted cross to the back of the six-yard box where Dudek had ghosted in behind her defender. Controlling the ball in her lap, Dudek then calmly passed the ball home to make it 2-0.

Eight minutes later, Blacktown had their third. This time, though, it was thanks to an impressive individual run by Tanya Borazio. The left-back latched onto the end of a long ball from Bourke, dribbled past her defender and surged to the end-line, nimbly slotting past Simonsen at the front post. 3-0.

It could have been four in the 64th minute when midfielder Natalie Vukovic had a shot from 25 yards out, following some more clean passing around the top of the box by the Spartans. While the ball looked to be looping into the net from an acute aerial angle, Simonsen was able to tip it over the crossbar to keep Manly’s deficit to three.

This chance seemed to shake Manly out of their stupor, and the visitors began to take control for the rest of the match. In the 67th minute, Manly striker Emily Minett robbed Hannah Bourke of possession as she tried to carry the ball out from the back. Minett drove towards the top of the box but her long strike pinged off the crossbar.

Manly’s renewed high press would see them claw a goal back minutes later after Patty Charalambous dispossessed Blacktown centre-back Keisha Allen. The ball then fell into the path of Minett, all alone in the box, who fizzed a shot low and hard across Dumont and into the net. 3-1.

Blacktown had one final chance to extend their lead further on 77 minutes when Roberts stood over a free kick just outside the D, only for her rocket of a strike to come off the crossbar as well.

3-1 is how the game would end. Manly showed glimmers of their former glory in the closing 20 minutes, but Blacktown’s organised and clean passing game was just too much for the visitors.

Blacktown have now secured a finals spot, and they have a chance to jump into the top three with a win next week over North Shore Mariners, while Manly stay in tenth.