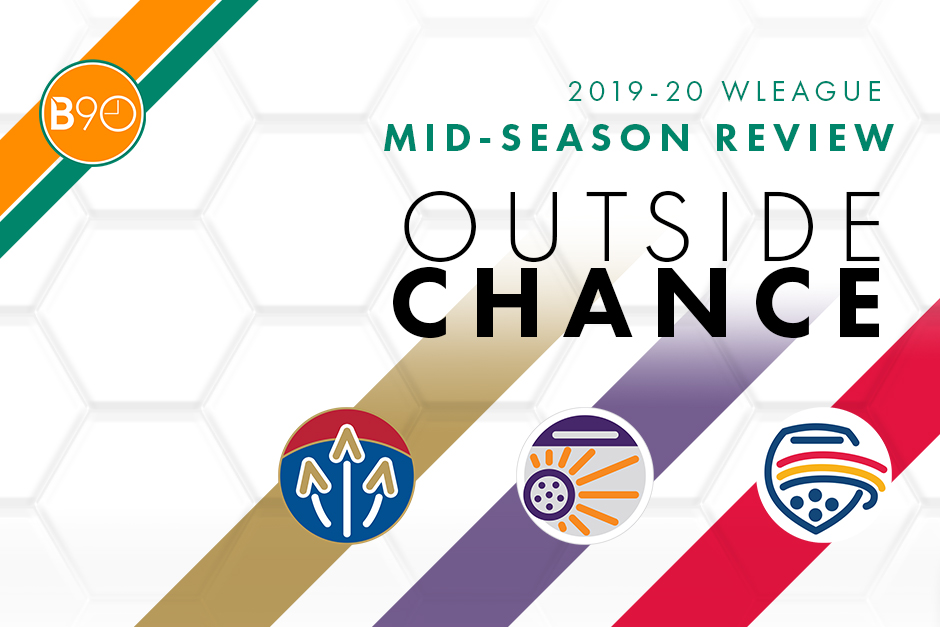 For the first installation of our W-League mid-season review, we look at progress of the bottom three teams on the Westfield W-League ladder and where to go from here.

As we approach the halfway point of the 2019-2020 W-League, the Jets sit in 7th spot with only a solitary win to their name, yet still in fleeting distance of the top four.

Newcastle started brightly with a strong display against star-studded Melbourne City at No.2 Sportsground, snatching a draw in front of a raucous home crowd.

This was followed by a 1-0 loss to Western Sydney, a heartbreaking 3-2 loss to Canberra before registering their first win of the season away to Perth.

Losses to Sydney FC (2-0) and most recently Brisbane Roar (2-1) round out 2019 and, perhaps in themselves, sum up the Jets season.

Their defence is by far their strength, with the rock-solid Hannah Brewer and Cass Davis pairing giving 100% to every challenge.

Between the sticks Claire Coelho has shown much improvement in her game, after spending the last two years as an understudy to Britt Eckerstrom. She’s pulled off some sensational saves to keep the Jets in matches.

Upfront Tara Andrews has been firing with four goals to start the season. Playing as a number 10 to reduce fatigue, she is supported by the speed and mobility of Nickoletta Flannery, Jenna Kingsley and Teigan Collister.

Where the Jets have the most trouble is the number of turnovers in the midfield, perhaps due to the lack of an experienced head to control things and help the likes of Clare Wheeler out.

The Jets’ biggest strength is their ability to counter-attack. If they can make this transition a little quicker as they did in 2017/18 and not get caught in midfield they could surprise a few at the back end of the season.

The midpoint of the season sees Perth Glory sitting 2nd bottom with just one point from six games, four goals scored and eleven goals against.

The numbers are not pretty and show that the team is struggling at both ends of the pitch. The lack of goals places huge pressure on the defence to keep clean sheets and, despite the heroics of goalkeeper Eliza Campbell, this is something they’ve been unable to do.

Consequently, they’ve been playing catch up football all season and the pressure of doing so has simply been too much for them, with just the one point gained against Canberra.

In order to turn things around Glory need to reduce their turnovers at critical moments and speed their transition play up. Improvements in these two areas should help improve their ability to increase pressure on opposing defences and hopefully lead to more goals.

A top-four finish appears beyond Glory, so now could be the time for coach Bobby Despotovski to give young Matilda Abbey Green a run in the team. As a young and talented goal scorer, she fits the bill of what is required on the field and is also a perfect example of the young local talent that Glory has stated they wish to develop.

It’s another difficult season for the South Australian side. Adelaide have done everything but put points on the board this season. The results reflect a squad that requires some more time to gel and some possible personnel changes. They’ve been unable to show killer instinct in front of goal, while conceding in moments of lost concentration.

Much hype surrounded Mary Fowler at the beginning of the season, and the young centre forward remains key for Adelaide’s hopes. She is the club’s top goalscorer, yet it’s perhaps her work dropping deeper that’s shown her best. Otherwise, the 16-year-old is caught out and isolated further up the park. The central connection between her and Lais Araujo needs to improve for Fowler to really play as the out-and-out number nine the club requires to consistently see goals on the board.

For a cellar-dweller team, the Reds are surprisingly comfortable on the ball, capable of looking commanding in possession. The biggest kick in the teeth for Adelaide has been conceding during short spells of inattention.

Teams have sprung them on the counter and the protection afforded by the pivoting two quality defensive midfielders available last season hasn’t translated this time around. In return, the centre back partnership of Amber Brooks and Julia Ashley has looked on the rocks, with some key goals conceded through the heart of the field.

For Adelaide, finals chances will be left to gain more dust on the shelves. It would take a miracle and stunning turn of events for the Reds to dig themselves out of the bottom half of the table.

Check out the Mid Season Reviews for the fight for the final four and the top three.