Round 11 saw Perth and Adelaide pick up their first wins of the campaign, Glory defeating Newcastle 4-2 while the Reds earned a 3-2 win over Western Sydney Wanderers. On Sunday, Melbourne Victory moved back into the top four courtesy of a 3-0 triumph over Canberra United.

The round kicked off with a highly entertaining Thursday evening contest in Newcastle. Perth ended their winless streak in emphatic fashion, defeating the Jets 4-2.

Junior Matilda Hana Lowry opened the scoring for the Glory midway through the opening period, netting her first W-League goal with a towering header from a Crystal Thomas corner kick. Thomas was also involved in Glory’s second goal as the American won a penalty off Tessa Tamplin in first half stoppage time. Morgan Andrews held her nerve from the spot to send Perth into the dressing sheds with a two goal cushion.

Glory continued their dominance after the interval, making it three on 65 minutes. Andrews was inches away with a curling 30 yard strike which crashed off the underside of the crossbar, but Caitlin Doeglas was quickest to react and score from the rebound for her second goal in two games.

It briefly looked like the Jets might launch a comeback in the 75th minute when Tamplin found the net in accidentally brilliant fashion, sending a right wing cross looping over Morgan Aquino and into the top corner. However, Celia Jimenez scored Glory’s fourth soon afterwards with a 30 yard bomb that left Claire Coelho stranded in the Newcastle goal.

The hosts found another consolation strike on 83 minutes. Jets substitute Renee Pountney set Lauren Allan up with a sensational reverse pass, and Allan duly found the top corner to open her W-League account.

Perth’s win moved them ahead of Newcastle and into seventh place.

A nail biting finish saw Adelaide United cling on to a narrow 3-2 victory over Western Sydney Wanderers. The Reds’ commanding first half performance nearly came undone in the dying stages as Western Sydney rallied late but couldn’t do enough to steal any points.

All the action from our 3-2 win over Wanderers! #AUFC #ADLvWSW #WLeague

Wholesale changes to both starting lineups gave Adelaide the advantage, with the Wanderers struggling to string passes together through the middle of the park. Early dominance from the Reds paid off with Chelsie Dawber’s solo effort, the forward picking the pocket of Alexandra Huynh before a perfectly hit far post finish produced the opening goal on 17 minutes.

Western Sydney were again limited to the long ball after halftime as the Reds continued to bring the tempo, challenges and composure. The hosts looked to build on their first half momentum and an offside flag denied Weber her hat trick, while the goal saving efforts of Wanderers centre back duo Huynh and Samantha Staab continued to limit the damage in the second half.

The temperature of the match reached boiling point with ten minutes to go. There was a penalty call for the Wanderers, however the opportunity was squandered as Kristen Hamilton skied the chance. It wasn’t over though, with the away side sending ball after ball into the box, and Staab’s back post header in the 88th minute provided the goal to ignite the match. The clock couldn’t go fast enough for Adelaide, and chaos from an in-swinging corner five minutes later saw the otherwise fantastic Lais Araujo end up with an own goal to her name.

Despite many anxious moments at Marden Sports Complex, Adelaide just held on to seal their first win of the season over Western Sydney Wanderers.

Sunday at Lakeside Stadium was all about continuing streaks, for better and for worse, with Victory getting their fourth straight win and Canberra their fourth straight loss. Jeff Hopkins – unbeknownst to him before the game – also became the W-League coach with the most wins to his name.

With their starting XI, coach Heather Garriock heeded the phrase “insanity is doing the same thing over and over and expecting the same results”. Emma Stanbury, Aoife Colvill, Bek Horsey and Lauren Keir all started, with Leena Khamis, Liv Price and Ashlie Crofts coming off the bench in the second half.

Victory returned to a back three formation, with a composed Laura Brock at the helm. A high press freed Darian Jenkins and Melina Ayres to apply fast-paced pressure on the wings.

The first half was defined by Ayres’ brace. Whilst she is known for scoring bangers, these goals originated in intelligent build-up play, signifying growth in the young striker’s style.

The first came from muscling around Simone Charley on the end of Jenkins’ cross, with a nudge of the foot sending it into the back of the net.

The second goal saw Victory play with ease around a scrambled Canberra defence. Angie Beard looped the ball in to Natasha Dowie, who found the easy pass back. Ayres was then able to cut through traffic with a shot into the bottom right of the net.

Victory continued a strong performance into the second half, with plenty of shots and possession. Annalie Longo was notable, often present in smart combination play through the middle.

The scoreline was not indicative of the chances they had, with Dowie uncharacteristically missing multiple chances. Her frustrations ended with a goal in the 77th minute as Amy Jackson whipped the ball in parallel to the goal-line, and Dowie nodded it in at the back post.

Canberra were lucky to keep Victory to three – this was more to do with Victory’s lack of precision in front of goal than an improvement in defense. There were glimpses of attacking power and athleticism seen from Elise Thorsnes, Camila and Charley. However the away side were unable to find many opportunities outside of long shots, with no one looking to hold the ball up in front of goal.

Whilst Canberra will be happy to leave the curse (CU-rse?) of 4-0 behind, improvements on-field were still spotty, leaving questions as to how they can readjust and see out the season on a high. 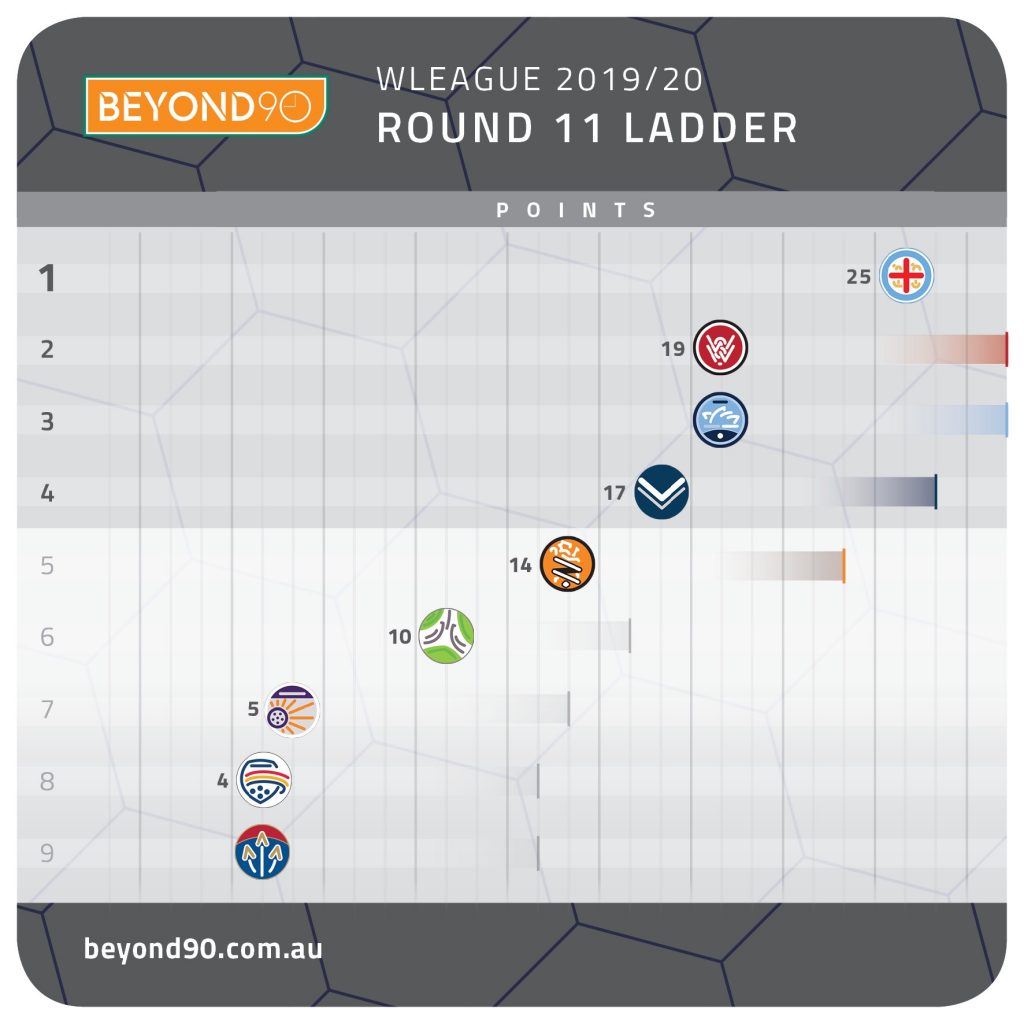 COVID-19: What Next for Women’s Football?