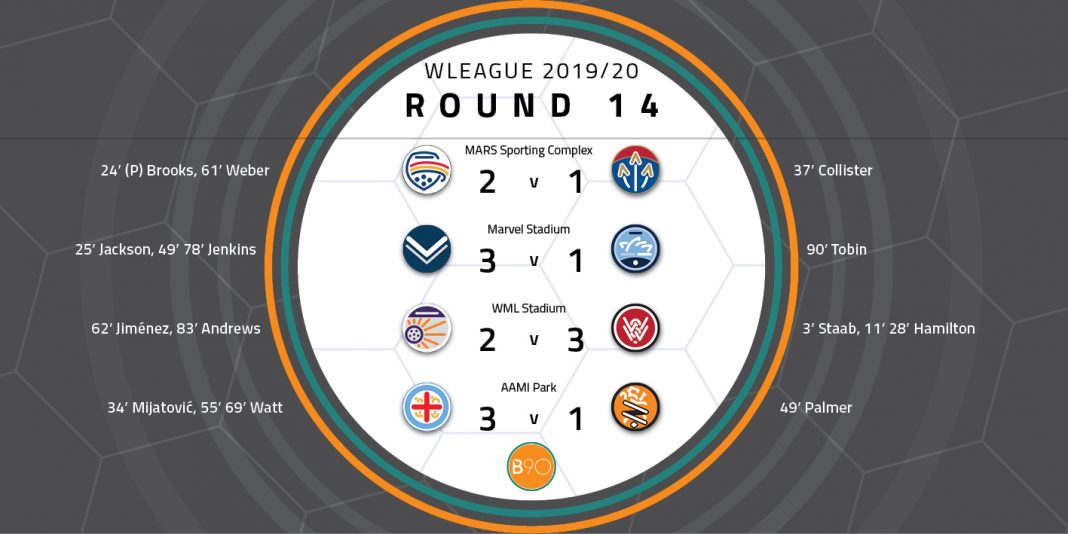 After 14 exciting rounds and 54 scintillating matches, the 2019-20 W-League regular season has come to an end. Now, in the words of glam-rockers Europe, it’s the final countdown! Beyond 90 looks back at the week that was.

Adelaide United wrestled the Newcastle Jets to avoid the wooden spoon in a 2-1 victory during the bottom of the table clash. A cracking equaliser by Teigan Collister wasn’t enough, as Mallory Weber added to Amber Brooks’ first half penalty on the hour mark.

Neither side looked to play safety first, with the end-to-end affair spreading play and seeing gaps of space across the park. The Reds had the better of play early, while the visitors created more of a threat in front of goal. A clumsy foul in the box by Hannah Brewer on Chelsea Dawber opened a small gap of opportunity for Adelaide that Brooks took with both hands. The captain provided a quality finish from the spot to put her side ahead.

The goal didn’t go to settling the state of play, the end-to-end contest continued to heat up. It wasn’t long after the Jets found the equaliser, with a back-post volley by Collister reward for causing havoc down the left flank all half.

Picking up where the first half finished, crunching tackles were the only roadworks between each final third, where most of play was found. The Jets seemingly had the edge for spells, but were unable to capitalise. Meanwhile the contest between Weber and Tessa Tamplin reached boiling point, with the forward pushed central to avoid the fullback. The move would provide the winner, as Weber darted between defenders and found the bottom corner, sealing victory.

Holding their nerve, Adelaide robustly dealt with Newcastle’s limited opportunities on the counter, while keeping the ball in the final third and seeing out the match. A late shuffle of the deck in the final two spots, the win seeing Adelaide leapfrog Newcastle to avoid the wooden spoon in both teams’ final game.

Second place and a home semi-final were the winnings for the final regular fixture of the season at this year’s second Big Blue. The sides last met in round one, with the Sky Blues serving a dominant 3-0 win at home against an unprepared Victory. 13 rounds later, and a transformed Melbourne side were able to bookend the season with a dominant win of their own.

Additional drama preceded the game with Natasha Dowie and Remy Siemsen both leading the league’s goal-scoring count with seven each. The Victory striker came close to adding her tally in the 17th minute, with Angela Beard sending in a well-weighted cross to the far-right post. Keeper Aubrey Bledsoe got a limb to Dowie’s quick header.

Whilst Dowie didn’t make the scoresheet, she did play a part in the opening goal at the 25th minute.

Amy Jackson made the smart through-ball to Dowie, who took her time on the run and nudged around Angelique Hristodoulou on the goal-line. Her pass bobbled over Bledsoe with Jackson cleaning up the remnants on the run.

Sydney got into the final third many times in an entertaining game of end-to-end football. However, the final crosses and long-range shots often lacked precision. Led by the calm Laura Brock, Victory’s defence stayed organised and distributed well under the pressure.

Amy Sayer broke the trend in the 30th minute with a cracking strike that looked to dip under the crossbar. Casey Dumont responded with an equally impressive save, leaping and knocking it over.

After closing out the half at 1-0, American signing Darian Jenkins cushioned the score-line with a brace in the second. In the 49th minute, her initial shot smacked into the back of Lindsay Agnew. She persisted and was able to bury it with her left foot.

If at first you don't succeed… well you know how the rest goes 😜@darian_jenks with a lovely finish that could be the goal that secures second spot on the ladder for @victorywleague!#MVCvSYD #BigBlue #WLeague

The second was another incredible individual effort. Jenkins leapt on a misplaced touch, dribbled around two Sydney players and smashed it home with precision.

🤩 Oh my! How about THAT solo run from @darian_jenks?!#MVCvSYD #BigBlue #WLeague

Sydney were able to dampen the score-line in the 90th minute, with late substitute Natalie Tobin shooting with conviction from outside the 18.

With Sydney dropping to third, they will be back next weekend to face Victory at Fortress Epping, for the Biggest of Blues.

Bunbury will forever be a part of Wanderers folklore. The coastal town situated approximately two hours south of Perth was the venue on Saturday night as the Red & Black secured their first ever trip to the W-League semi finals.

A combination of set pieces and favourable winds sent Dean Heffernan’s side on their way. They were 1-0 up inside three minutes, Sam Staab lashing the ball in with her left foot after a Kyra Cooney-Cross corner (what a mouthful!) was cleared off the line.

The dead ball did the trick twice more for the Wanderers inside the opening half hour. Another Cooney-Cross corner was nodded in by Kristen Hamilton on 11 minutes, and Hamilton repeated the feat in the 28th minute when she got her head to Ella Mastrantonio’s inswinging free kick.

The hosts gradually worked their way back into the contest and were on the scoresheet in the 62nd minute when Celia, who struck the post in the first half, forced the ball over the line following a penalty box scramble. Western Sydney hearts then leapt into their collective mouths on 83 minutes when Morgan Andrews leapt highest to score from Celia’s cross.

.@MorganAndrews throwing her name in the hat for the #WLeague Golden Boot with a towering header.

There were many anxious moments in the closing stages as the Glory threw everything at the Wanderers, but the Red & Black hung on for dear life, creating a massive piece of history for their club.

Melbourne City created another bit of history with their 3-1 win over Brisbane Roar, recording their second undefeated campaign in five seasons, drawing only once and conceding just four goals in 12 matches.

Chances were few and far between in the opening period of the game with City looking the more likely to score.

It was Serbian international Milica Mijatović who broke the deadlock in the 34th minute. Her fifth goal of the season looked familiar as she hit a curling shot on the edge of the box past a diving Mackenzie Arnold.

City wouldn’t have it all their own way, conceding their first goal in over 700 minutes just after the half time break. Indiah-Paige Riley picked Lauren Barnes’ pocket and slotted the ball across the face of goal for a waiting Hollie Palmer to tap in.

However, the Melbourne side would go on to flex its muscle with Yukari Kinga and Ally Watt combining twice to put the result beyond doubt.

Kinga found Watt, perhaps unintentionally, in the 55th minute, with the American controlling the ball before beating the ‘keeper.

THAT first touch from @allymwatt 👌

Don't underestimate how good that trap was! Kinga absolutely pinged it in 😂

In the 69th minute, Watt was in the right place at the right time to poke it home from close range following Kinga’s square pass into the box.

City will now host the Western Sydney Wanderers in a semi-final for a place in a fourth grand final.