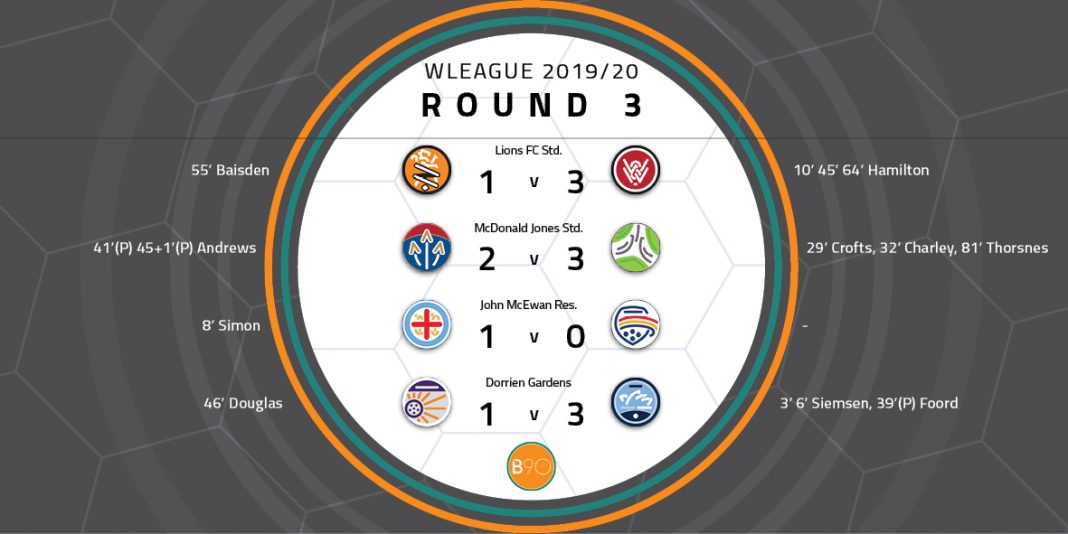 Round 3 of the W-League highlighted just how important it is in this short season to do well in the early rounds.

Western Sydney Wanderers moved to the top of the W-League table for the first time in their history on Thursday night after a 3-1 win over Brisbane Roar at Lions Stadium.

The Wanderers raced to an early lead as Lynn Williams burned past Natalie Tathem on the left flank, before picking out Kristen Hamilton for the finish. A shell-shocked Roar looked to reassert themselves in attack, with Tameka Yallop and Katrina Gorry combining well in the middle of the park. However, the visitors were ruthless in transition, looking to take advantage of the speed of Williams and Hamilton.

Perhaps cruelly for Brisbane, a second goal arrived moments before half time. A long throw from Sam Staab was not initially dealt with and Hamilton was alert to the opportunity, prodding home to double the advantage.

High defensive pressure saw the home side pull one back early in the second half through Rylee Baisden‘s first W-League goal, but Hamilton’s third in the 64th minute sealed a third straight victory for Dean Heffernan’s side.

After back-to-back home defeats, the Roar must pick themselves up and look to respond away to Canberra United. Also on the road, the Wanderers will fancy their chances against a travel-weary Melbourne Victory in Morwell.

A vocal crowd of 3,446 fans were on hand at McDonald Jones Stadium to witness Hannah Brewer’s 100th W-League appearance, but it was her former side Canberra United who came away with the points, snapping a two year winless away streak in a five-goal thriller.

After dominating the opening period Canberra finally broke through in the 29th minute via Ashlie Crofts. Handed her first start in the W-League and coming in for former Newcastle hero Katie Stengel, Crofts was able to follow through and score after a long range shot from Karly Roestbakken was tipped onto the bar by Claire Coelho.

The visitors doubled their advantage three minutes later. Pacey American Simone Charley, who had earlier forced the Jets to shuffle Gema Simon from her usual left back position over to the right in a swap with Tessa Tamplin, burst into the box off the back of a Leena Khamis long range through ball to score her 3rd goal in as many games.

The Jets were handed a lifeline soon afterwards as some good pressing from Teigan Collister forced a mistake from Rebekah Horsey resulting in Kaleigh Kurtz bringing down Nikki Flannery just inside the box.

After a word from her assistant and perhaps a sneaky look at the big screen, referee Isabella Libri pointed to the spot and Tara Andrews converted her 30th W-League goal for Newcastle.

Andrews would make that 31 right on half time as Roestbakken was judged to have brought down a runaway Jenna Kingsley for another penalty to send the home side into the sheds in an upbeat mood.

In the 2nd half the Jets dropped Andrews into the midfield to make use of her passing ability and to test Canberra’s back three with the pace of Flannery, Collister, and Kingsley.

Two golden chances fell the way of Flannery in the 65’ and 70’ minutes, the first being a free header from a Collister cross which she couldn’t quite direct as desired. This was followed by a well worked passing move where Andrews flicked the ball around her marker into the box for Flannery, but faced with the prospect of putting her side ahead against her former club, could only blaze her volley over the bar.

Libby Copus-Brown would hit the post soon after, before Norwegian Elise Thorsnes sprinted away off the back of a well placed Roestbakken ‘route one’ through ball counter attack. Showing all the composure that over 120 international caps brings, Thorsnes coolly slid the ball past Coelho to give Canberra United the victory.

The highly fancied Melbourne City team may not be firing on all cylinders yet but are sitting comfortably in the top four after coming away with a 1-0 win against a plucky Adelaide United in Shepparton on Saturday.

Claire Emslie came back into City’s starting line-up, while Adelaide were unchanged from Round 2.

City started impressively with their passing game, and in the 8th minute Ellie Carpenter capitalised on some fine lead-up work by Rebekah Stott, sliding a ball into Kyah Simon from wide of the penalty box for Simon to finish sharply.

The possession stats were vastly skewed towards Melbourne City but Adelaide United did well to hold them out in their own third, and on the counter looked dangerous at times especially when Mary Fowler had the ball at her feet.

Adelaide thought they had equalised in the 53rd minute through Amber Brooks on the end of Khalia Hogg‘s free kick, but it was not to be as the assistant referee flagged Brooks offside.

In the 65th minute Adelaide keeper Sarah Willacy denied Emslie acrobatically from a curling shot just inside the box.

In danger signs for the other teams in the competition, Melbourne City’s extensive buildup play is not yet translating sufficiently into meaningful goal-scoring chances, while Adelaide United’s position on the ladder belies the way they have played in the opening rounds.

Played in typically hot Perth conditions, this game was effectively over inside the first six minutes, with a brace from Sydney FC’s Remy Siemsen.

The shell-shocked home team struggled to gain a foothold in the game during the first half, and Sydney moved the ball around with poise and confidence. Glory’s cause was not helped by their inability to hold onto the ball and they allowed the impressive Teresa Polias and Chloe Logarzo far too much time and space, and it was no surprise when Sydney scored their 3rd of the game in the 37th minute as Caitlin Foord converted a spot kick given after Princess Ibini was adjudged to have been brought down by Julia Sardo.

Glory coach Bobby Despotovski brought on Ayesha Norrie for Lexie Moreno at the start of the second half, and almost immediately they scored through Caitlin Doeglas. Sydney remained the dominant side though, and only the cross bar and Glory keeper Eliza Campbell prevented Foord and Logarzo from extending the lead further.

Sydney coach Ante Juric was happy with his sides performance, but rather ominously for the rest of the league said “we’re not at our best”.

Read all of our W-League coverage.