Melbourne City won its first Melbourne derby since November 2017 with a 1-0 win over Victory at ABD Stadium. City remain unbeaten this season and finish round five on top of the table.

It took Rado Vidošić’s side until the 89th minute to find a way to break the Victory defence. Emily van Egmond played a quick ball to release Steph Catley down the wing. The left back steamed towards the by-line and cut it back to an unmarked Kinga in the middle of the box – Kyah Simon’s initial run drawing a defender and leaving the Japanese international with plenty of space to smash it home.

The half time introduction of Kyah Simon in place of Claire Emslie seemed to energise the home side who were dominant and justly rewarded after a cagey first half.

Victory keeper Casey Dumont, plus the centre back pairing of Jenna McCormick and Emily Menges, were more than up to the task in the opening 45. The trio made plenty of blocks and saves, with Dumont most notably denying van Egmond from the spot.

City’s stacked defence was able to thwart any Victory attacks, restricting them to only one shot on goal for the night.

Brisbane Roar secured a home victory for the first time this season, coming out on top in a five-goal thriller against Adelaide United at Lions Stadium on Saturday afternoon.

Previous matches in the Sunshine State had seen the visitors take the lead in the opening exchanges, but this time it was the Roar who raced out to a two-goal advantage. Oueensland NPLW recruit Rylee Baisden laid off the final pass for both first-half goals, picking out Indiah-Paige Riley for the opener in the fourth minute, then Hayley Raso just eight minutes later to extend Brisbane’s lead.

However, the Reds did not back down from the challenge, and were able to pull a goal back through teen superstar Mary Fowler before half time.

A blistering counter attack capped off with a tidy finish from @HayleyRaso got us over the line in Richlands!

In the second half the Roar looked dangerous on the break, but struggled to find the perfect option in the final third to extend their lead. A determined Adelaide capitalised on these missed chances, as the outstanding Mallory Weber beat Mackenzie Arnold with a low drive from distance to equalise.

Staring down a third straight home match without a win, Brisbane rallied together and finished off the contest. Raso netted her second and the Roar’s third following a lightning fast counter-attack from an Adelaide corner.

With Glory fighting for their first win of the season and Canberra hoping to find some consistency in their results, the match at Dorrien Gardens shaped up to be a tough contest.

The home team started the brightest and showed more attacking intent than the visitors in the opening 10 minutes. However it was Canberra that was first onto the scoreboard, with a fantastic drive from Simone Charley after the forward got on the end of a sumptuous Kaleigh Kurtz long pass in the 12th minute.

Glory worked hard for an equaliser early in the second half, but often took one touch too many, allowing time for the Canberra defenders to do their jobs.

Perth were unlucky on the hour mark when a long-range strike from Kat Jukic struck the bar, but Canberra otherwise looked comfortable, with Camila and Olivia Price controlling the game from midfield.

With just 1 minute of regulation time left, Glory snatched an equaliser in dramatic fashion as Kim Carroll rose to head home a Morgan Andrews corner. Her first goal in Glory colours meant that Perth won their first points of the campaign, and Canberra were left wanting for the win.

Annabel Martin was named for the Jets for the first time, replacing Teigan Collister as a precaution for hamstring tightness. Veronica Latsko took her place on the bench for the away side in her first appearance back from injury, while Alanna Kennedy returned to the Sydney FC starting lineup. Amy Sayer also made a welcome return in the second half.

After weathering a 15 minute opening storm with Caitlin Foord and Siemsen rampant, the Jets worked their way back into the game with a disciplined defensive and midfield possession mindset.

The match however, belonged to Siemsen. On the half hour, she was the recipient of an exquisite curled cross from Angelique Hristodoulou, nodding it beyond Claire Coelho in the Jets’ goal for the lead.

5 goals in 5 games for @remyysiemsen 🖐

The game opened up in the second half for both teams, but a distribution error from Coelho on 50 minutes gifted a second goal to Siemsen.

Newcastle came closest to scoring with long range strikes from Hannah Brewer and Clare Wheeler, and Sydney FC also had further chances in their opponent’s goalmouth, but as the final whistle blew it was the visitors who were deserving of their two goal victory. 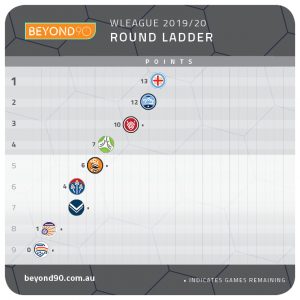 Coming up in W-League Round 6:

Women in football and ACL injuries