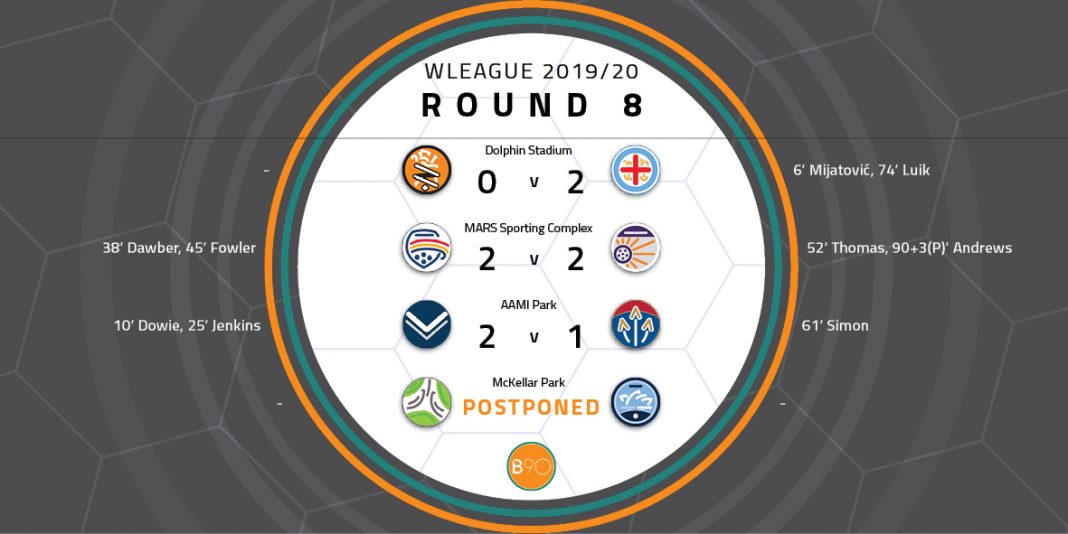 Whilst City continued their unbeaten streak, the real drama in Round 8 came from the bottom of the pack.

Canberra’s home game against Sydney was postponed due to poor air quality in the capital. Details for the rescheduled fixture to be confirmed.

Melbourne City continued their unbeaten run with a hard-fought 2-0 win over Brisbane at Lions Stadium on Thursday night.

The visitors, who entered the match on a run of five straight victories, made the perfect start with a goal after just six minutes.

Captain Steph Catley swung in a dangerous cross from the left flank. Though Mackenzie Arnold read the delivery well, her punch sent the ball straight to the feet of Milica Mijatovic, who finished with aplomb.

It was end-to-end football in the first half, with Roar attackers Hayley Raso and Tameka Yallop testing Lydia Williams while Catley and Ellie Carpenter continue to pepper the penalty area with crosses.

It seemed Brisbane would fall further behind in the early stages of the second half after Katrina Gorry brought down Aivi Luik in the box, but Catley’s penalty was wide of the mark.

Raso continued to be the lead threat for the home side, earning appeals for a penalty of her own and finding good space in the final third.

However, City would seal the points with 15 minutes remaining, Luik slotting the ball past Arnold to send her side top of the table.

Perth stole the spoils late to deny Adelaide their first win of the campaign in a tantalising bottom of the table contest that finished 2-2.

Against the run of play, Adelaide managed to go into half time with a two-goal cushion. For the first half-hour, Perth worked the ball well, while the Reds looked rusty and culpable of missed connections.

On the 38th minute, Chelsea Dawber broke the deadlock with a composed one-on-one with the goalkeeper finish after Dylan Holmes forced the turnover in midfield.

Soon after, Mary Fowler capitalised with a fine finish from another easy turn over at the edge of the penalty area.

Adelaide buzzed after the break, however, it was the long ball that paid dividends for Glory to pull the match back to 2-1. Crystal Thomas turned Julia Ashley inside out before scoring Perth’s first.

Without Natasha Rigby on the flank to contain Mallory Weber, Perth struggled to repeat their first-half performance. However, missed opportunities and good goalkeeping kept the score at 2-1, until injury time.

With bodies in the box, Thomas was bundled while on the ball, earning a penalty. The cool-headed Morgan Andrews read where Willacy was diving, bringing the game level on the death.

This is how it went down in our 2-2 draw with Perth. #AUFC #ADLvPER #WLeague

Despite a scrappy second-half performance against an organised Newcastle, Victory’s 2-1 win was enough to push them 4th on the ladder.

Victory adopted a strategy from cross-city rivals for their first AAMI Park game of the season, with Angie Beard, Jenna McCormick and Emily Menges making up the three-person backline.

In the first half, the home side dominated possession and shots, with Darian Jenkins having a stand-out game on her birthday.

Natasha Dowie found the header on the end of Jenkins’ cross just before the 10-minute mark. The American striker then got her own name on the scoresheet, cleaning up Claire Coelho’s spilt save 15 minutes later to bring it to 2-0.

Fan favourite Casey Dumont impressed in the 35th minute with an agile save on the end of Tara Andrews‘ powerful header towards goal.

Cliched thought it is, the “2-0 is most unsafe scoreline for a winning team to be on at half-time” thing proved to have merit in the second half.

Mistakes in the midfield were leapt upon by the away side. Newcastle were able to quickly distribute and exploit the bare flanks via Andrews and Nicki Flannery.

Gema Simon brought it to 2-1 in the 60th minute, with Andrews finding her in acres of space on the left side. Simon then slotted her first goal of the season past Dumont as cool as can be.

Gema Simon's first goal of the season pulled us back within a goal just after the hour mark! #MVCvNEW #WLeague #MadeOfNewcastle pic.twitter.com/4RniUPkyNP

She also played a part in the near equaliser at 85 minutes, leaving Victory behind on the transition and sending the ball to Teigan Collister on the wing. Collister’s cross met Lauren Allan’s head at the back post, but the chance went high.

The contest left Victory fans falling back on “a win is a win” whilst Newcastle Jets reminded spectators they’re not to be underestimated. 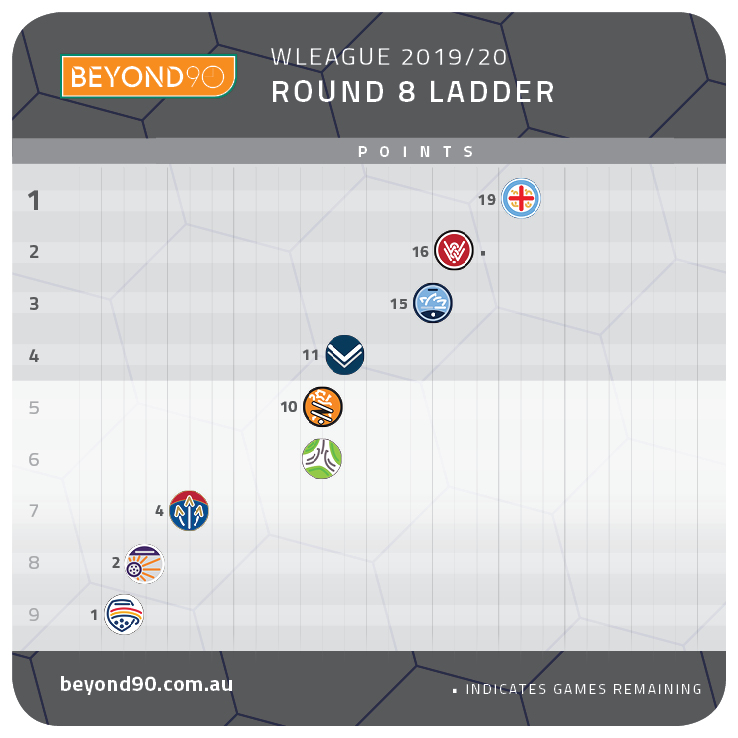 Clare Polkinghorne: The Power of Influence

Beyond 90 Podcast: W-League Round 8 Wrap