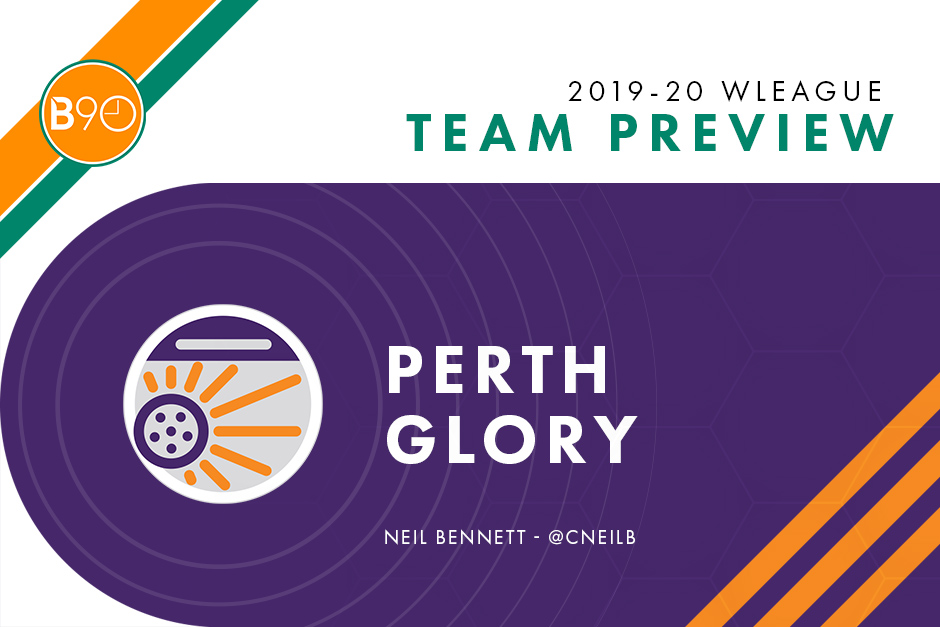 Before the new season has even started, the biggest talking point around Perth Glory is not who has signed, but rather who hasn’t. The decision by superstar Sam Kerr not to pull on the purple shirt will have a profound impact on the club, as she has been the spearhead and fulcrum of the side for the last four seasons. Kerr is not the only loss though, as the club must also cope without Rachel Hill, Alyssa Mautz, Nikki Stanton and Katie Naughton, with the American quartet all opting not to return to Perth this season. They have also lost the services of Jacynta Galabadaarachchi who has moved to West Ham.

Coach Bobby Despotovski was philosophical about all the changes, recognising that this was a consequence of the lure of European football, and had this to say about how the loss of Kerr and the others would play out this season.

“Her quality and leadership are irreplaceable, but this presents opportunities for the local players. We’re looking to add an American striker who can mentor the younger players and help bring them up to W-League level. We’re also hoping to bring in 2 midfielders from overseas, with the aim of having the local players learn from them, with the ultimate goal for the club being a team full of West Australians in a 5 year time frame,” he said.

Last season’s grand finalists, Perth Glory were unbeaten until round nine when they lost away to Melbourne Victory. They only lost twice more in the regular season, but those three losses meant they finished fourth, forcing them to travel to Melbourne and then Sydney as they attempted to win their first ever Championship.

Their semi-final win against Melbourne Victory was probably the game of the season, with a Kerr inspired Glory refusing to accept defeat, finally winning 4-2 in extra time after an epic struggle. It could be argued that the exertions of that game plus the quick turnaround and long flight back east took too much out of the team, and they never really looked like they could beat Sydney in the Grand Final, eventually losing 4-2 to be runners up for the third time in five years.

Ins and outs (including coaches)

The experience of Kim Carroll and Shannon May will be vital this season with many young players in the Glory squad. Shot stopper Eliza Campbell will also need to have another stellar season if Glory is to keep pace with the rest of the competition.

Goal scoring is going to be the biggest challenge for this season. During the 2018/19 season, Kerr, Hill and Mautz accounted for 80% of Glory’s goals and finding replacements must be a priority for Glory coach Bobby Despotovski. The loss of the hard running Mautz and Stanton will be keenly felt in the Glory engine room, and finding like for like players is going to be difficult.

What is their weakness?

Last season Glory were the league leaders in terms of goals scored. However, only Western Sydney and Newcastle conceded more goals, and it is in the defensive third of the pitch where Glory could struggle. Losing Naughton, Mautz and, in particular Stanton, means they have lost a lot of defensive steel and the likes of Carroll, May and the returning Mexican international Arianna Romero will all need to be at their very best to try and keep the number of goals conceded as low as possible, especially if the side is going to struggle for goals at the other end.

What’s the big question for the team?

Kerr’s partnership with Hill meant that Glory were always likely to score at least one goal in a game, and the pace and power of the two strikers dictated that the team played a fast and direct style of play. It will be fascinating to see how coach Bobby Despotovski sets up the team without the dynamic duo upfront.

If Glory is to have any impact on the season then the form of their most experienced players will be vital. In Kim Carroll and May, they have two of the longest-serving players in the league and their influence on the younger players around them will be more important than ever. Mexican international Romero will also be a key player, as her international experience and proven partnership with Kim Carroll could prove to be a key for the Glory season.

The time has come for Lexie Moreno to deliver on her potential. She had little game time last season with both Leticia McKenna and Jacynta Galabadaarachchi playing similar roles to her. Moreno spent part of the last local season training with the Future Matildas in Sydney, and returns to Perth to try and establish herself as a starting player. With few big names in the squad, she could be the creative spark to fire Glory this season.

With so many changes, it’s difficult to see this team making the top 4.

Kim Carroll, May and Sarah Carroll have over 370 W-League games between them, and Eliza Campbell has international experience, but the rest of the squad, except for Tash Rigby, have very little W-League game time under their belts and this inexperience could be telling. The short nature of the league means they could find themselves struggling by the time the New Year starts, as the opening seven fixtures have them playing Canberra twice, Champions Sydney, bogey side Newcastle and the two Melbourne teams.

Taylor Ray – Back in the Game